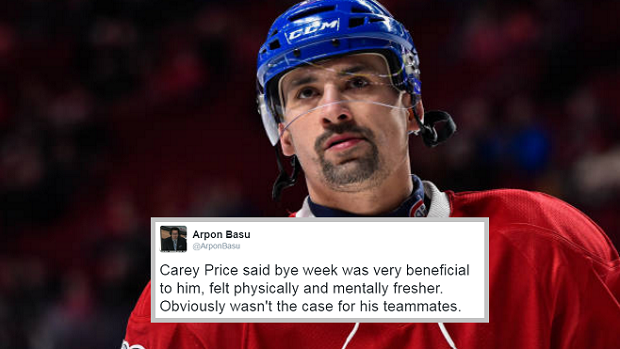 This season, the NHL has implemented a new, mandatory five-day bye week for every team in the NHL.

You’ve probably noticed at different times throughout the year, players have posted photos from somewhere tropical in the middle of the season, which feels pretty unusual.  However, it obviously gives teams a little bit of time to rest, heal and refocus themselves for the stretch run.

It seems like it has anything but beneficial to the teams though, at least in the game after their break. Washington and Montreal returned from their bye-weeks today, and this tweet from Arpon Basu sums up how it went for them.

Carey Price said bye week was very beneficial to him, felt physically and mentally fresher. Obviously wasn't the case for his teammates.

Washington also lost their game and that has made for a pretty terrible record for teams coming out of a bye week.

MTL and WSH both lost this afternoon, so teams coming out of bye week are now 3-10-3. Tampa Bay comes out of its break vs. Stars tonight.

Here is a full list of the teams that have played a game after their bye week already.

The NHL season is a grind, and it’s possible that a vacation in the middle of the season can take some of the intensity out. It’s the same argument that goes on every year in the playoffs of whether or not it’s good to have a short series, because you might have too much time off.

Even if those teams do lose, it may still be better for the teams in the long run. Players are constantly nursing injuries at this point in the season, so any time off can help. Plus, win or lose, it might be worth it for views like this.