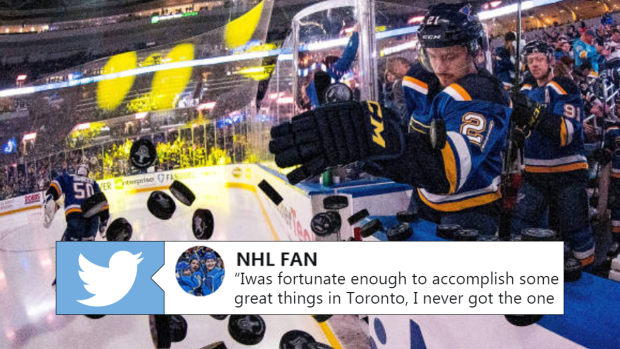 The Toronto Maple Leafs suffered yet another first round exit, once again at the hands of the Boston Bruins. The B’s, who seem to have the Buds’ number come playoff time, have now made it all the way to the Stanley Cup Final.

There they will meet the St. Louis Blues, and a few familiar faces for Leafs Nation, but most notably Tyler Bozak.

Bozak first played with the Leafs way back during the 2009-10 season, and he was with the team right up until the last season. With the Leafs putting a precedent on a younger, faster team, with new faces becoming the faces of the team, the fan favourite Bozak was an odd man out.

It was time to Bozak to move on to other things, and that’s what brought him to St. Louis. He signed with the team, one which nobody was necessarily expecting a Stanley Cup Final run with, and dropped this supremely cool quote at the beginning of the season.

“Iwas fortunate enough to accomplish some great things in Toronto, I never got the one thing I’ve always really wanted.

That’s why I signed in St. Louis. There’s your headline. Print it.”
-Tyler Bozak

The quote came from a Player’s Tribune article, and the title of that article is “For Toronto”. While Leafs fans a generally happy for their former 1st line centre, it’s gotta sting a little bit to see that.

Bozak was seen as an odd man out on the Leafs team that had Stanley Cup hopes on their mind, so Bozak went to team that wanted him – one that wasn’t supposed to win the Cup – and is now battling in the final.

It’s hard not to cheer for a guy as loyal and likable as Bozak, but it will definitely be strange seeing the longtime Leaf lift the Cup if the Blues manage to pull off the Cinderella season.

Crying again because my hubby is in the Stanley Cup Final. So proud 💙