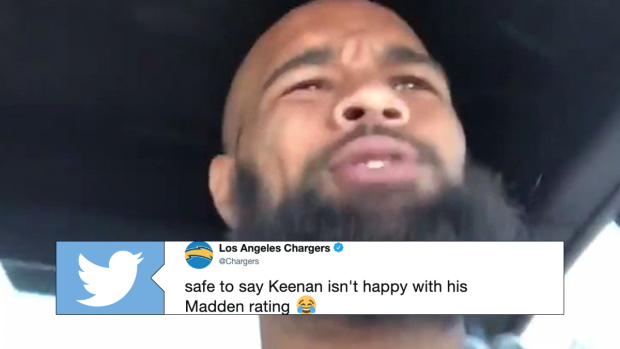 With the release of Madden 20 just around the corner, EA Sports released their initial player ratings for the upcoming season, and just like clockwork, there was no shortage of NFL players left a little miffed by the game.

One of those players is Tom Brady, who wasn’t happy with his speed rating and took to Twitter with a hilarious video to make his case. He was far from the only player with a complaint, however.

The game’s best cornerback, Jalen Ramsey, had nothing to complain about, but others including Keenan Allen, DeMarcus Lawrence and Eric Ebron were getting spicy about their rating on social media.

Submitting new evidence to be considered for my @MaddenNFL speed rating. You can’t photoshop a video. pic.twitter.com/6h02i6oRqR

God’s Child 🙏🏾.. through it all, He continues to bless me & for that, I want to let his light shine through me! He gets all the glory!! Thank you! Have a great day & year! https://t.co/OzZVJfNR2T

HOLD UP @EAMaddenNFL you not just going to disrespeck me like that with an 89 and get away with it....PUT. SOME. RESPECK. ON. https://t.co/ndDkGvo7gx.

Damn since I got the 84 madden rating I just purchased this shirt so fresh pic.twitter.com/pBmfnKz3ni

77 tackling can’t get over that the disrespect is real 🤭

Shoutout madden 99 club but how in the hell isnt Tom Brady & Pat Mahomes not a 99.

I recently found out that I’m only a 81 rating on @EAMaddenNFL I don’t play the game but I do feel extremely disrespected.. I will not forget this #NoBadDaysStill