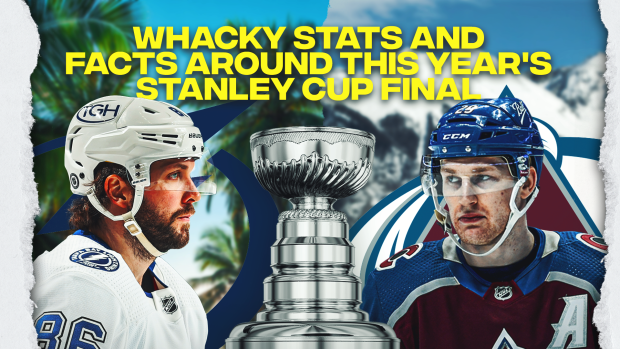 The Colorado Avalanche and the Tampa Bay Lightning are set to square off in a Goliath vs. Goliath Stanley Cup Final. Two of the most complete teams we’ve seen since the turn of the century will almost definitely be putting on a memorable series.

In fact, this particular matchup has already proven to be a breeding ground for fun stats. Mostly, these are just irrelevant factoids that are more fun to recognize than actually helpful.

If you can’t beat ‘em, join ‘em, right? Corey Perry was on the Dallas Stars in 2020 and the Montreal Canadiens in 2021, both team lost to Tampa Bay in the Final. Now, Perry is on the Bolts and hoping to make the third time the charm.

Incredibly, this isn’t the first time this feat has been accomplished. Marian Hossa did it a little over a decade ago!

After losing back-to-back Final appearances, Hossa finally got one with the Blackhawks. Perry will be hoping for a similar fate as he chases down his elusive second ring.

Because it’s an automatic 1st round advancement, right?! Okay, jokes aside though, the Leafs have been eliminated in the 1st round three of the past four years, and in each of those eliminations the victor has gone on to play in the Cup Final.

Beat the Leafs, go to the #StanleyCup Final… but lose? 👀 pic.twitter.com/peOxqrSXV8

The Leafs fan base is essentially just calloused at this point.

Jagr’s streak comes to an end

After 42 years, the beloved streak of Jaromir Jagr having a teammate play in the Cup Final comes to an end. Dating back to 1980 when Bryan Trottier won his first Cup, at least on player in the Final has called Jagr a teammate at some point over his lengthy career.

One of the NHL's most incredible streaks has come to an end.

This year's #StanleyCup Final will be the first time in 40+ years to not feature a teammate of Jaromir Jagr (@68Jagr). 🤯

Not sure if this counts as a stat, because it’s actually more of a non-stat than anything, but it’s an interesting fact nonetheless.

Neither team’s name ends in ‘S’, the first time a Cup Final has ever not featured a team ending in ‘S’.

There are only four teams in the NHL that don’t have their team name ending in ‘S’, with the Minnesota Wild and the Seattle Kraken joining the Lightning and Avalanche. This stat – as is the case with some others on the list – is truly irrelevant.

A stat that exists, but does not matter @Jomboy_

There ya have it.

The Avs are putting their perfect Final record on the line, the only one currently standing

The Colorado Avalanche have been to the Stanley Cup Final two times (1996 and 2001), both of which they’ve won. They are the only team that has made the Cup Final that has also never lost a Cup Final,

Of course, this could change if a team that has never been to a Final ends up winning a Cup on their first try, but for now we’ll just have to see if Colorado can maintain perfection.

And then there’s this…

I believe it is a first.

To me, the real story is that the Avalanche only play Stanley Cup Final series against teams at sea level.

And there you have it, a handful of needless stats that offer you absolutely nothing!

…Beyond entertainment value, of course.