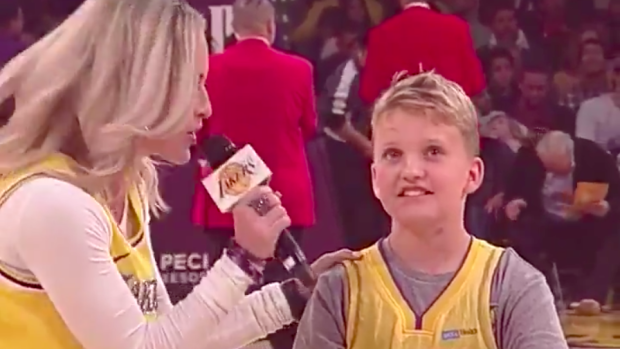 Forget Anthony Davis. The Lakers need to sign young Maxx, the 10-year-old fan who shot a perfect 8-for-8 during one of their mid-game shooting contests.

For context, you need 10 points in 30 seconds to win the challenge and snatch a free pass to Lakers summer camp. Maxx finished with 30 in 30! Even JaVale McGee took notice, wandering over from the timeout to show some love.

(No, we’re not counting the miss at the end. Maxx’s release clearly came after the buzzer, and counting that miss would be pretty lame, right?)

Usually, these fan shooting contests can be pretty brutal to watch, although you can see how the bright lights of an actual NBA arena would be rattling. Not for Maxx, though! He's ten years old with range to the NBA three-point line. Ben Simmons could never.

Between Maxx’s shooting display and the addition of Rob Gronkowski and James Corden to the Laker Girls, Staples Center was putting on a in-game entertainment clinic on Tuesday night.

Rob #Gronkowski has a new gig in Los Angeles 😂 . (🎥: @houseofhighlights)