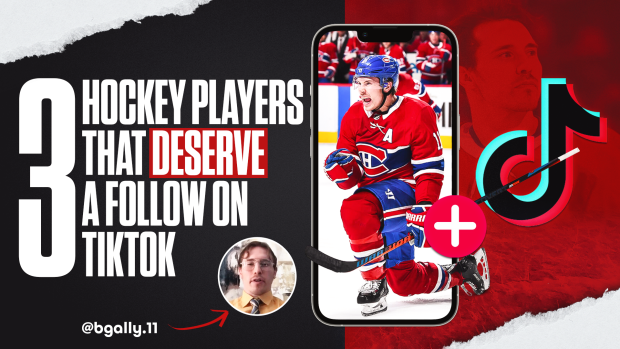 Since being released in 2016, TikTok has quickly become one of the newest and most popular social media apps today.

As hockey fans, there’s nothing we love more than seeing athletes being active on social media. From a pet post on Instagram to a random thought on twitter, it simply makes you feel more connected with them. Social media is a great way to show your authentic, behind-the-scenes self, and that’s quickly what TikTok has turned into.

While it’s only six years old, hockey players are slowly jumping on the TikTok train and we are absolutely here for their creative video’s they’re sharing out.

Here are three of our favourite hockey players that we love to watch on the app.

Not only is the Montreal Canadiens forward a lip syncing king on TikTok, but he’s actually hilarious too. Gally might not post as consistently as he did during covid but he still deserves a spot on this list for his legendary videos.

The Ottawa Senators forward loves to use tiktok to share some takes and isn’t afraid take part in the dances!

@mathyjoz21 Am I the only one ???? #fyp #boycottingmelons ♬ original sound - Mathieu Joseph

If you want more BTS hockey content, this Ottawa Senators forward is the profile to watch. He entered the TikTok world hot and dropped some incredible footage of himself during training.