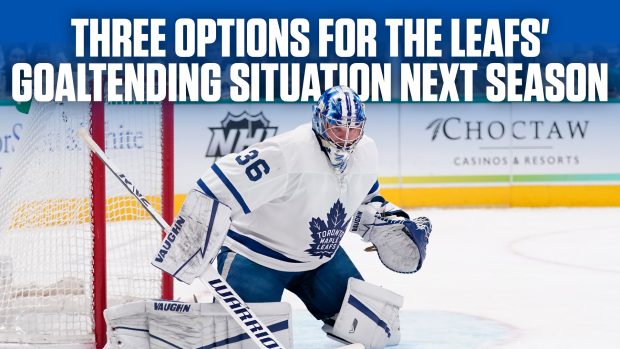 So... what would you like to see the Leafs do between the pipes?

Wow, do the Toronto Maple Leafs ever have an interesting offseason ahead of them.

Sure, we can talk about their core four and whether the team should run it back or not. But forget that for a moment. There’s a glaring question mark in the crease that needs to be addressed and as a Jets fan who couldn’t care less about this team, I’m about to lay out some options. Let’s quit the pitter patter and cut to it, before this conversation reallllllly starts ramping up more as the weather gets warmer.

In no particular order…

Let’s get the obvious one out of the way. It was a weird year for Campbell, who at times was brilliant and at others flat. But let’s not forget that the brilliance he showed earned him a trip to Vegas for the All-Star game and when this dude is on… he’s on. It took Campbell some time to find his game at the pro level (he was drafted 11th overall by the Dallas Stars in 2010), but he is only 30 years old, which is a relatively young age compared to some other goalies who will soon be available on the market. ‘Soup’ also seems to be a beloved member in the Leafs locker room and hey, if Toronto got by Tampa (which they nearly did...), Dubas' squad could be battling for a spot in the Stanley Cup Final right now.

Two older goalies with plenty of experience are set to hit the market this summer, including three-time Stanley Cup winner and future Hall of Famer Marc-Andre Fleury, along with Stanley Cup Finals bound Darcy Kuemper. Fleury, who’s entering the twilight years of his career, makes a lot of sense. His playoff stats with the Wild were nothing to write home about (3.04 GAA, .906 save percentage through five games played), but this is a risk the Leafs could take without a long-term commitment. The question is… would The Flower come to Toronto?

As for Kuemper, 32, a long-term commitment might not be necessary for his services either. Kuemper was solid for the Avs during the regular season and for a win-now team like the Leafs, this could make a lot of sense; especially after coming off of a Stanley Cup Final. The Saskatoon native is about to reach the end of a two-year, $9 million contract.

Here’s where things get wild, and you might be asking yourself… why would Nashville trade their Vezina candidate goalie? Well… because they’re not in win-now mode like the Leafs are, and they happen to have a 19-year-old prospect in Yaroslav Askarov who’s not far away from taking over the crease. Saros has three years left with a cap-hit of just $5 million on his contract, so… why not swing for the fences and just go for it? It would cost the Leafs an arm and a leg, and William Nylander (and maybe more), but as we’ve witnessed in these playoffs (at least in the East)... goaltending is so crucial for a Cup run.

So Leafs fans… what would you like to see the Leafs to between the pipes this offseason?