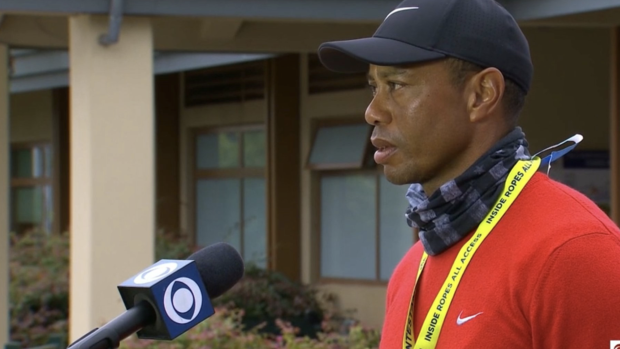 If you saw Tiger Woods walking down the street would you recognize him?

At the PGA Championship this week at Harding Park in San Francisco Tiger Woods was sporting a bright yellow identification lanyard around his neck during  his post-round interview on Sunday.

Would love to meet the security guard who checks to see if Tiger Woods has an “Inside Ropes All Access” lanyard. pic.twitter.com/KqOE9QuYNx

The simple fact that Tiger Woods had to wear a credential to prove that he was, in fact, Tiger Wood is kind of mind-boggling but security is security and it does make for a funny picture.

Fans were also just as bewildered that he was wearing the lanyard.

I love Tiger wearing his "All Access" lanyard as if there is a single person on the grounds that doesn't know he's Tiger Woods. A+ troll job. pic.twitter.com/xwcLl68ypm

I love ⁦@TigerWoods⁩ sporting an ‘All Access Inside Ropes’ lanyard, just in case anyone at the #PGAChampionship doesn’t know who the 🐐 is. pic.twitter.com/GEnEkVApxG

Is it really necessary for Tiger Woods to be wearing this lanyard? I think everyone knows who he is out there. 😂 pic.twitter.com/hYMkHvErCr

Tiger Woods needing to wear a lanyard stating that he is a contestant is hilarious to me for some reason. pic.twitter.com/eOtxDskyqZ