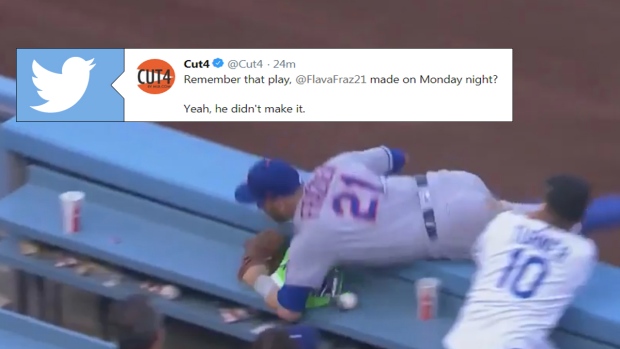 The New York Mets have been playing the role of spoiler in Los Angeles this week as they took each of the first two games of their three game series against the Dodgers by a score of 4-2. During Monday night’s victory, Mets third baseman Todd Frazier pulled off a pretty incredible catch in the stands…or at least he made it seem like he did.

SportsNet New York’s Steve Gelbs took a closer look at the play and the different angles that came with it and caught something very unusual from one of the angles. Take a look.

Remember that play, @FlavaFraz21 made on Monday night?

We’ve seen players pull off the hidden ball trick on other players before, but for a professional baseball player to pull something like this off right in front of a bunch of MLB umpires is pretty impressive and extremely sneaky. However, Frazier made the smart play by immediately tossing the fake ball back into the stands before the umpires or anyone else on the field could take a closer look at it.

Here’s the original call from the game, where Frazier got nothing but praise for his athletic ability from the commentators.

Excuse me sir, we'll need to see your ticket. pic.twitter.com/Rk6myEdImp

The Mets are way back of the NL Wild Card race, but they’re going to play spoiler anyway they can moving forward. Even if it means using fake baseballs.