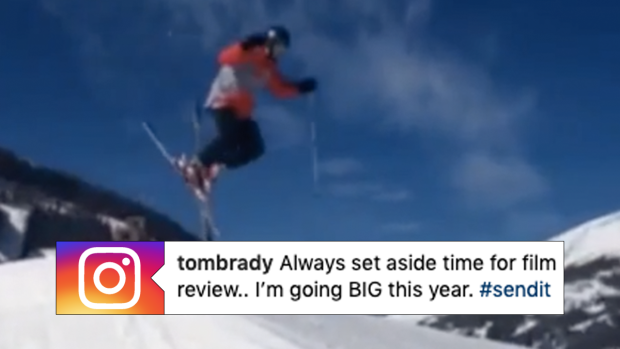 About two years ago, Tom Brady posted a video of himself wiping out while skiing. It was a pretty awkward fall, and after the video went up, Patriots fans were freaking out about a potential injury to their then-39 year old quarterback. (If only they knew then how the 2019 season ends.)

If you french fry when you're supposed to pizza, you're gonna have a bad time! Trust me!!!

It looks like Brady is preparing for another ski trip this offseason, and he’s reviewing the game tape before taking the slopes again. Because the NFL season might be over, but film session never is.

Tom #Brady with the film breakdown of his ski crash 😂 • (🎥: @tombrady)

Brady must’ve been a first-time skier or something, because that fall was absolutely brutal with his limbs splayed all over the place. If he’s taking pointers from Lindsey Vonn, though, we think he’s going to be just fine for round two.

Way bigger hill. Way more speed. That’s what it’s got to be.

Vonn, widely considered the GOAT of women’s skiing, finally entered retirement this year after a long and successful career. We think retirement is suiting her just fine, though — she was recently honoured during puck drop before a game between her hometown team, the Minnesota Wild, and her boyfriend’s team, P.K. Subban’s Nashville Predators.

She may have ties to @PredsNHL now, but @lindseyvonn will always be one of us. Congratulations on a remarkable career Lindsey! pic.twitter.com/V5aMslCLkM