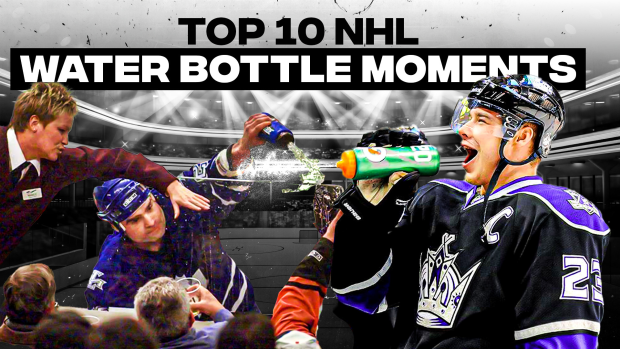 Dustin Brown announced that he will be retiring from the NHL at the end of the 2022 Stanley Cup Playoffs. The former Los Angeles Kings captain has been around the league for a long time, racking up 712 points over the span of 1,296 regular season games. He'll be remembered for all sorts of things, including his part in two Kings' Stanley Cup titles, but one of the funnier moments we associate with Brown is undoubtedly his famous water bottle blunder.

We decided to do some research in honour of Brown's bottle blooper, and we were actually able to put together a list of 10 iconic water bottle moments out of the NHL. Besides the classic water bottle looks, they have been involved in some very funny, controversial, but overall unforgettable moments

10. Roenick chucks bottle across the ice in frustration

Jeremy Roenick is one of the most outspoken players in NHL history, and on January 13th, 2004, “JR” wanted to make sure that his opinion was heard. After getting a high stick to the face that resulted in a bloody mouth and a missing tooth, Roenick was so angry that referee Blaine Angus missed the penalty that he threw a water bottle across the ice towards Angus, hitting his own teammate in the foot instead. While Roenick did apparently apologize to his teammate, the remorse stopped there as Roenick went on to lambast Angus and the NHL in an expletive-laden interview, telling the NHL to “wake-up” through swollen lips. Roenick received a one game suspension for the incident.

This prank has become a little more common, but we’ve searched for the origin and believe that this is the first known pulling of the loose bottle cap prank. Doug Gilmour was known for his colourful personality on and off the ice. During a practice as a member of the Montreal Canadiens, Gilmour let some of this flair show by unscrewing the lid to a water bottle and then leaving it on the bench uncapped. Moments later, teammate Craig Rivet fell into the trap and got a little shower courtesy of Gilmour.

Jonathan Toews is one of the faces of the NHL, winning multiple Stanley Cups (as well as a Conn Smythe trophy), leading Canada to gold during the 2010 Olympics in which he was named captain, and even gracing the cover of NHL 11 and NHL 16. In a 2015 promotional video, Toews shows us why he is still one of the great players in the game by pulling off an insane water bottle trick shot.

One of Corey Perry’s main jobs on the ice is to get under his opposition’s skin. He does so in a number of ways including trash talk, stealing player’s sticks, and shooting the puck well after the whistle. One of Perry’s favourite agitation techniques is to use a water bottle. In these next two videos, Perry can be seen filling an unsuspecting Jeff Carter’s glove with water before skating away undetected, and spraying opposing coach Patrick Roy while the benches were involved in a heated argument.

Sidney Crosby and Nathan Mackinnon have worked together in videos before, famously pretending to work at a Tim Horton’s Drive Thru in Nova Scotia. This time, footage shows what appears to be a fan video of the two shooting pucks at water bottles, but things don’t go as planned. As many YouTube watchers have pointed out, the video is unfortunately not real and was used to promote a hockey stick, but it is entertaining to watch the two superstars bottle-hunt nonetheless.

4. Crosby throws a water bottle on the ice, pretends he didn’t mean to

Some will say Sidney Crosby embellishes. While they would likely be talking about his on ice play, one moment coming out of last season’s Stanley Cup Final had him pretending he had done no wrong from off the ice. Just moments before Phil Kessel’s second period goal in Game 5 of the final, Crosby appears to blatantly throw the bottle on the ice. He maintains that the whole things was just an unfortunate accident.

Haaaaaa it was Sidney Crosby who threw the water bottle on the ice pic.twitter.com/K6n9x6lVn4

“I didn’t mean to throw that" pic.twitter.com/UaUC6PEKFX

Sometimes water bottles malfunction, so usually players just put it down and grab another. Malfunctions do not always end up being hilarious, but sometimes they are good to produce some laughs. This is the case for the Phil Kessel water bottle malfunction. It’s not the fact that the bottle didn’t work the way he wanted, it’s the amount of time he continued to squirt water all over himself, not realizing that it was happening. After finally giving up, Kessel tosses the bottle behind him in frustration.

Going into a commercial break, the broadcasters of a game between St. Louis and Los Angeles went to a shot of the Kings bench and caught a hilarious moment. Dustin Brown was trying to grab a drink of water after his shift but somehow managed to grab a bottle from the wrong end, leading him to squirt water out towards the ice instead of into his gaping mouth. The video is capped off with the perfect shot of Brown taking a quick glance up the bench to see if any of his teammates had noticed. To Brown’s relief, nobody seemed to notice. Little did he know that many more people than he thought had just gotten a laugh at his expense.

Despite the humiliation, Brown was in good spirits about the incident.

Heading to the rink early today have to help the trainers mark all the water bottles with arrows. #funnymomentscaughtincamera

Sometimes it is hard to pick what the number one moment should be on a countdown, and often times fans will debate what they think should be in the top spot. This is likely not the case for this countdown, as Tie Domi’s water bottle incident overshadows every other moment tenfold. In a game against the Philadelphia Flyers, Domi nearly got in a fight with Luke Richardson for a hit he threw on Darcy Tucker. While the linesman managed to break the fight up before it started, Domi would find himself in a different kind of fight when an angry fan came tumbling into the penalty box trying to get a piece of Domi. And what started this fiasco? You guessed it, a heavy squirt from Domi’s water bottle.

Since the famous Domi incident some other players have turned to the water bottle as a weapon of choice against hecklers. There's nothing more satisfying than a loud-mouth fan that thinks they're untouchable suddenly have to deal with a face wash.

When you've had enough of the heckler, so you spray 'em with the water bottle. @smithpelly . #Capitals . ( 🎥 Via: @nbcswashington)

Just for kicks, we'll throw in another water bottle-related video. Apparently as part of his warm-up routine Nate Schmidt likes to perform a little magic with his trainer.

Nate Schmidt does this before every game. He calls it his Magic Trick.

As pointed out by one of our followers, Nathan Horton's odd water bottle dump ahead of 2011 Stanley Cup Final Game 7 should absolutely be included in the list.