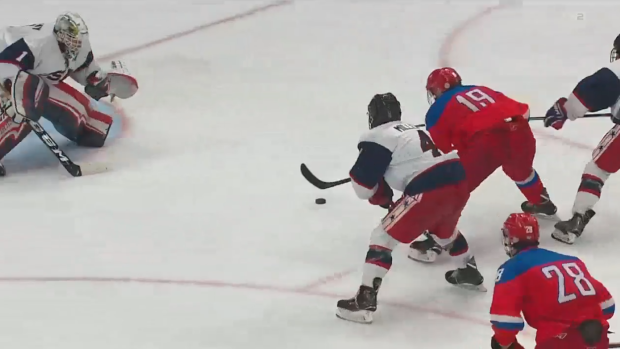 After a wild finish on Friday night that saw Team Canada net a buzzer-beating goal to force and eventually win in overtime, they were able to advance the Hlinka Gretzky Cup final on Saturday night. Their opponents, the United States, were relegated to a bronze medal match against Russia, and there was no shortage in that one either.

In a back-and-forth flurry where seven goals were scored in the third period, Vasili Podkolzin mustered one of the highlights of the tournament in response to a U.S. goal just seconds before.

Dangling three Americans as he took it up the ice, Podkolzin looked all but unstoppable as he put a bow on his hat trick for the night.

Russia would hold on for a 5-4 win and the bronze medal finish. As for Podkolzin, he’s considered a top prospect in next year’s NHL Draft, and with his scoring prowess on display in this one, you can see why.

Aaron Huglen just did that 😮 •• #HlinkaGretzkyCup