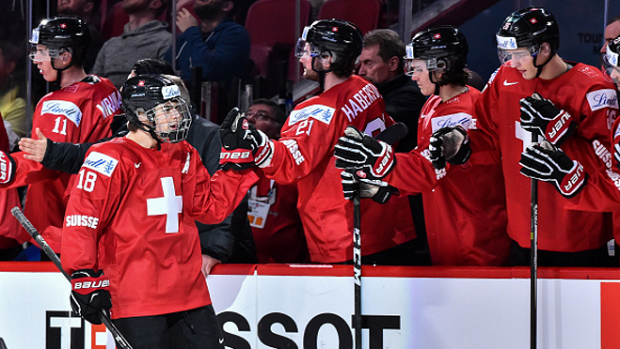 The World Juniors are all about seeing up and coming NHLers for the first time on the big stage. Many of these prospects have already been drafted to the NHL, but some special talents are able to make their teams at younger ages.

To start the list off, we’ll go with the tournament’s most impressive draft eligible player, Switzerland’s Nico Hischier.

Hischier, who some believe may rival Nolan Patrick for the top spot in this year’s draft scored this beautiful goal against the Americans yesterday. Switzerland eventually loss to the U.S., but Hischier also scored a second goal for the Swiss, tying the game for a short time and giving the Americans a real scare in the third period.

Krastenbergs plays for the Oshawa Generals in the OHL and is only projected as a late-round pick, but he may have raised his profile a bit with this goal on a lucky line change for the Latvians. His goal kept this game close for a little bit, but USA eventually won 6-1.

Lias Andersson sauces to himself

Andersson is projected as a first round pick by most scouts, and he showed off why on this play. On a crisp pass to the slot, he pops the puck up in the air on his backhand before sniping the puck just as it touches the ground again.

Madsen isn’t projected to get drafted by some scouts, but maybe this helps him out a bit. For a short time, Denmark was the fan favourite in the tournament and this absolute snipe from Madsen helped start that movement, as his goal was crucial in the team’s 3-2 win over Finland.

Eeli Tolvanen absolutely rips a shot off the bar and in

Eeli Tolvanen (2018) showing off his wicked shot, 2-0 Finland with the power-play blast. Leads the team in SOG too #WJC2017 #2017NHLDraft pic.twitter.com/ZlWUqpnhJW

Tolvanen is projected to go in the top 10 in this year’s draft by many NHL scouts. Finland has had a rough tournament, but the team has a good crop of players eligible for this year’s draft. Eeli Tolvanen showed why he’s one of them with this snipe.