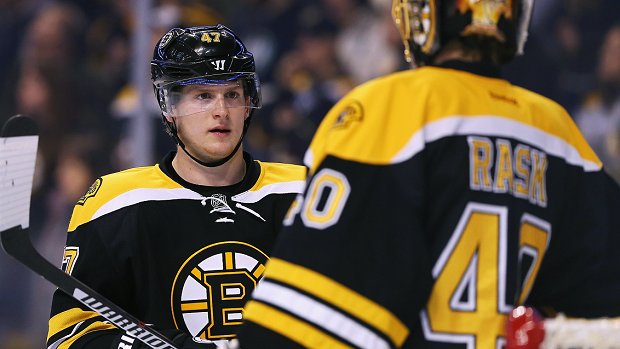 NHL Players aren’t the biggest athletes around, largely because they need to have a good balance between speed, finesse and agility.

The speed of the game requires players to be much more nimble and the same goes for goalies. Staying trim and agile can help make the inch difference that gets you a kick save or allows a goal, so they’re not always going to be packing on a lot of mass. Still, after the Boston Bruins visited the Patriots (And Tuukka Rask showed off his field goal kicking ability), this picture had Bruins Defenceman Torey Krug thinking his goaltender should mix in a burger.

Easy to see why the @patriots are the measuring stick around the league after taking in practice. The best part of this pic is @trask40 is literally right next to @gronk and you can't see him. Mix in a burger Tuukks

"The best part of this pic is [Tuukka Rask] is literally right next to Gronk and you can't see him. Mix in a burger Tuukks."

Tuukka Rask is definitely one of the thinner players in the league at 6’3” and 176 pounds, but at that size he’s been over a .920 sv% in six out of nine season with none below .915. He’ll hope to have another strong year this season, but if he wants to break out of two .915 season in a row, who knows a burger might help.

After all, if the Great One tells you to go have a burger, you better do it.