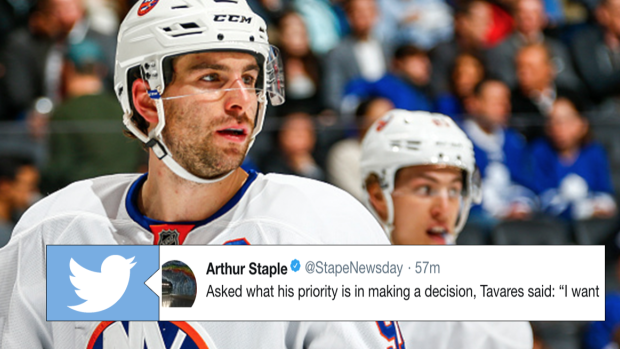 There are some big-name UFAs that could be looking for new homes come the start of free agency later this year, but the biggest name on the list is John Tavares by far.

The 27-year-old has 52 points this season and has spent his entire career on Long Island, but he could have choose to play somewhere else come the summer.  Leafs fans are hoping that somewhere else is in Toronto.

Playing around with @CapFriendly armchair GM mode and I figured out a way to afford Tavares and still have 2 million to spare. You're welcome @MapleLeafs #leafs #TMLTalk pic.twitter.com/vAczRPw5xl

Monday, the Islanders take on the Canadiens in Montreal and ahead of the game, the topic of free agency came up as it always seems to do when JT is in Montreal or Toronto.

Tavares took advantage of the opportunity, though, as he reaffirmed his commitment to staying in Long Island for years to come.

Asked what his priority is in making a decision, Tavares said: “I want to stay on Long Island... I haven’t thought about being anywhere except with the Islanders.” #Isles

#NYI Tavares prior to facing #Habs tonight: “I hope to stay in Long Island. There’s no doubt, a lot of positive things going forward with the organization and our team here, so I haven’t thought about being anywhere else but with the Islanders.”

The Islanders are one-point back of a playoff spot in the Eastern Conference and are moving back to Long Island, so the organization is in a good place right now.

The Islanders win bid and will return back home. Thoughts? 🤔

It will be in an even better place once Tavares signs a deal to stay with the team, but until then, fans won't be able to rest easy and Leafs fans, along with fans of every other team, will continue to hope and pray that he doesn't stay with New York.

Shouldn't get too excited yet. Everyone says all the right things until the right things don't happen. If someone asked you about your position at your job knowing your bosses will listen you'd say all the best things while they sign your check. After that is a different story.

Watch John Tavares become a Nashville Predator or something.

When John Tavares says he wants to stay and uses the phrase “on Long Island”. True Lawn Guylander through and through. #Isles

Get you a man as loyal as John Tavares