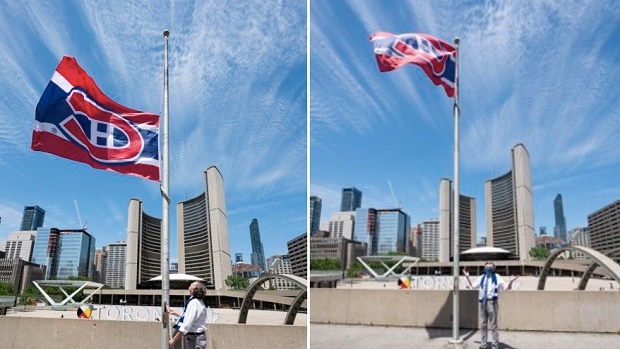 Ever made a bet you thought you had no chance of losing, but somehow – even with all the odds stacked in your favour – the world worked against you and you managed to lost it anyways?

No one thought the Montreal Canadiens had any chance at all against the Maple Leafs, and no one predicted that they would sweep the Winnipeg Jets, but here we are.

If you’re a Toronto fan, this one stings particularity badly.

This season (like many others) was supposed to be theirs, and suddenly, the CN Tower is lit up in Canadiens colours.

Tonight the #CNTower will be lit red, blue, and white for the @CanadiensMTL who will go on to represent Canada's hope for a 2021 @NHL Stanley Cup! pic.twitter.com/cEqsXqBefZ

Today, Toronto got even more Hab-ified when John Tory had to make good on a bet he made with Montreal’s mayor and fly a Canadiens flag at city hall.

Well, Mayor @Val_Plante, a bet is a bet.

To complete my playoff bet on the @MapleLeafs with Montreal Mayor Valerie Plante, I raised the @CanadiensMTL flag at Toronto City Hall today. #LeafsForever pic.twitter.com/rZnGNN6xmG