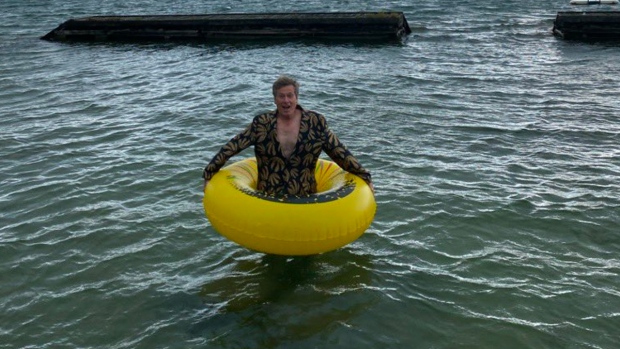 Toronto Mayor John Tory has always been a massive supporter of the Toronto Raptors. He always seems to be doing it while sporting his classic black and gold Raptors blazer. He sported it on stage at the Raptors championship celebration and even when he challenged Drake to a shoulder rub at Jurassic Park.

Toronto Mayor @JohnTory is channeling his inner Drake and going with the @Raptors tonight. pic.twitter.com/0xwytEz7FT

We hadn’t seen much of the classic blazer until game 3 of round two. Mayor Tory decided it was time to bring some good luck to the Raps after back to back losses to the Celtics.

We’ve been here before. We can all help by cheering even harder. Clearly time to deploy the @Raptors jacket for Game 3. #WeTheNorth #RaptorsVsCeltics #Raptors

After a successful victory he doubled down and slept with the blazer on to show his full support for the team before game 4.

As promised, slept in the @Raptors jacket to provide maximum support to our team ahead of Game 4 tonight. #WeTheNorth #NBAPlayoffs #Raptors #RaptorsVsCeltics pic.twitter.com/cV51GZb8oJ

When you thought his love was finished he made another splash when the Mayor decided to go for a dip with the jacket on before game 5.

Probably last swim of the year so taking the jacket for a swim to support a big Game 5 for our @Raptors! #WeTheNorth #NBAPlayoffs pic.twitter.com/TaJoigq6i5

What will be in store for game 6, who knows, all I’m hoping is that Mayor Tory has a really good dry cleaner.