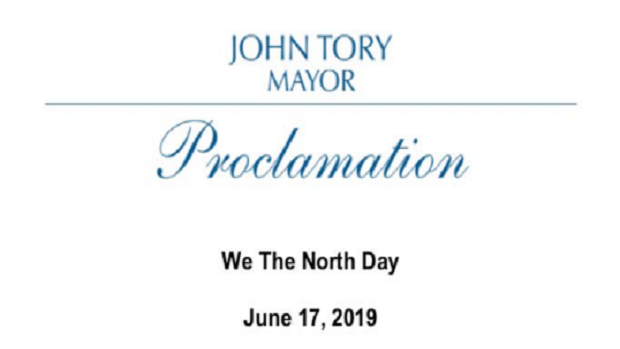 It was always king of going to be, but now it's official. , Photo via @JohnTory

The entire country rallied around the Toronto Raptors in their historic playoff berth that saw them defeat the defending Golden State Warriors in six games to win the NBA title, and now, the city of Toronto is gearing up for an unprecedented celebration.

Toronto hasn’t seen a championship game since the mid nineties, when the Blue Jays won back-to-back World Series titles, and the city has been starved of championship parades ever since. You can say Torontonians are a little excited.

No sleepin' in the streets! #WeTheNorth pic.twitter.com/22dRO3yWyU

The streets of Toronto are FULL of fans pic.twitter.com/tTUh7FU5sy

Mayor John Tory has been an avid supporter of the Raps’ throughout their entire berth, donning snazzy jackets and getting out to show his support at almost all the games.

Up on stage at Jurassic Park... @Drake and @JohnTory are representing the Raps 🤝 pic.twitter.com/GpTxO1rUbO

Toronto Mayor @JohnTory is channeling his inner Drake and going with the @Raptors tonight. pic.twitter.com/0xwytEz7FT

Now, the city is gearing up for an elaborate championship parade, and Mayor Tory made a special proclamation on Twitter to make the celebration all the more official.

I'm proud to proclaim Monday as #WeTheNorth Day in the @CityOfToronto. As we gather to celebrate the first NBA championship in @Raptors' history, I encourage everyone in our city to show our support, pride, love, and appreciation for this incredible team. #WeTheChampions pic.twitter.com/SvsVnOLGiy

Monday June 17th will officially be “We The North Day”, and if you weren't already planning on going all-out for the parade and the Raptors, now you don’t have a choice.

We’re not sure exactly what a proclamation means, but it sounds official, and we are officially psyched.