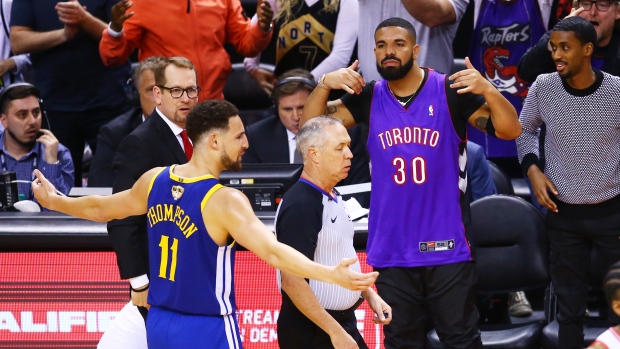 For the first time in Golden State's last five appearances in the NBA Finals, they lost the opening game of the series.  Thursday night, the Raptors defeated the Warriors in an action-packed game that Drake was just as much a part of as the players themselves.

The man that has made many headlines over the course of the playoffs upped his game for the NBA Finals, but apparently he got some advice, or a warning if you will, from Tracy McGrady that he and Raptors fans may not want to take lightly.

McGrady said he told Drake to "not poke the bear" before Game 1, but by the time the first game of the Finals was over, Drake had poked multiple bears in Draymond Green, Stephen Curry, and Klay Thompson.

Drake had some words for Draymond after the Raptors' Game 1 #NBAFinals win 👀 pic.twitter.com/d0NCKKFFHE

Drake got away with poking the bear in Game 1, but will he get away with it again Sunday night?  We can't wait to find out because a Golden State team with their backs against the wall is even more dangerous.

Stephen Curry isn't feeling down after Golden State's Game 1 loss. In fact, it's the exact opposite. pic.twitter.com/KQlU0yAXql