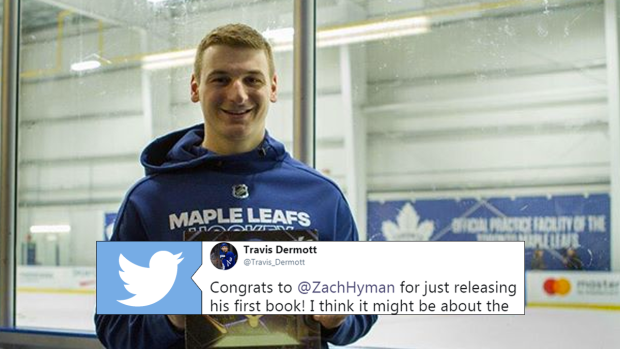 If you weren’t aware, Hyman is an award-winning, best-selling author of several children’s books. He released his first two in 2015, The Bambino and Me and Hockey Hero, and yesterday he added a third book to his resume: The Magician’s Secret. While being known for his offence in college and junior, Hyman has become a grittier player to secure his role on the Leafs’ top line and teammate Travis Dermott saw an opportunity to poke a little fun at his new book title.

Dermott was just curious if one of the Magicians that Hyman was referring to was William Nylander or Auston Matthews.

Congrats to @ZachHyman for just releasing his first book! I think it might be about the stick handling abilities on his line, but I often judge books by the cover. https://t.co/AZLx5VKLpO

BOOK GIVEAWAY! The Magician's Secret is out today and my team @tundrabooks is helping me give away 3 signed copies! Like this post for a chance to win! 🎩📚

Hyman continually receives praise from his coach for being the player that makes things easier for Nylander and Auston Matthews, saying that he does a lot of the digging to get them the puck, but he’s having a quietly productive season offensively as well.

Zach Hyman is in the top 90 in the NHL in even-strength points. Just sharin' that with the gang.