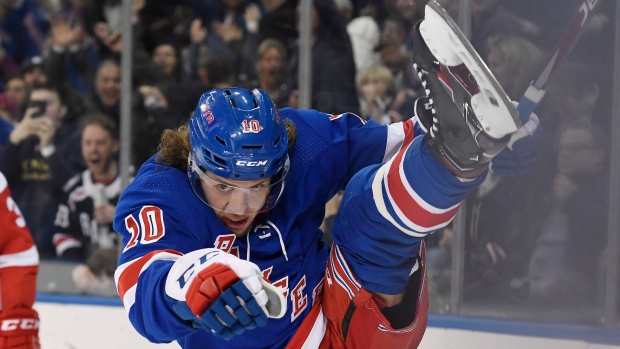 The NHL officially entered into Phase 2 of their return to play hockey plan that will see 24 teams have a shot at the Stanley Cup.

If you frequent hockey twitter, you would've seen various writers and analysts tweeting about their picks for certain awards. TSN hockey analytics writer Travis Yost offered his opinion through the analytical lens in which he breaks down the game.

Yost had an interesting top three that hasn't really been tossed around out there: Artemi Panarin as the front runner, Leon Draisaitl as the runner-up and Elias Pettersson as the third and final placeholder.

In conclusion, my Hart ballot for skaters:

I think Draisaitl is a Hart finalist for sure. What I don't think is that he can seriously take it from Panarin.

I suppose the argument is offensive counting numbers and Edmonton being a playoff team versus New York being a maybe, but this is just way too stark. pic.twitter.com/TANK4FZvBW

This is ridiculous. Have only seen this split a few times in the past -- Sedin and Ovechkin in 2009, Wheeler in 2008. pic.twitter.com/yf0XtsmThx

As we're reminded every season, the Hart is defined as the "player judged most valuable to his team." If we look it solely from that perspective, Panarin simply made everyone around him way better, and conversely, when he was off the ice, the Rangers were near the bottom of the league in goals per 60 minutes of play (-0.8). He set a career-high in points with 95 (32 goals, 63 assists) in just 69 games. Certainly, a nice season, indeed.

Something every other Hart candidate is going to need to wrestle this away from Breadman.

Maybe it was the three month layoff but I had forgotten how absurd this was: pic.twitter.com/HQA1J1TvKo

But, that doesn't mean there's no arguments for Leon Draisaitl, Nathan MacKinnon, among others.

This is from an article in November, cites an average of 23:50 minutes per game.

Panarin had a whopping 4 seconds per game of PK time, while Draisaitl was averaging 1 minute per game. pic.twitter.com/fS3jSYLIiD

Nathan MacKinnon didn't have his partner that put up 90+ points. Avalanche top six constantly hurt + MacKinnon himself was injured yet still put the team on his back and cracked 90+ points.

MacKinnon lost Hart to Hall because Rantanen also had 80+ points.

It's a compelling and fascinating argument, no doubt, and we're only going to hear more of them going forward once the discourse picks up over the other awards.

We encourage you to read Yost's recent articles where he previews every playoff matchup, with his most recent being Panarin's Rangers battling the Carolina Hurricanes.

While I have you here you must now read my Carolina/New York playoff preview. https://t.co/TdMUTsAvIH