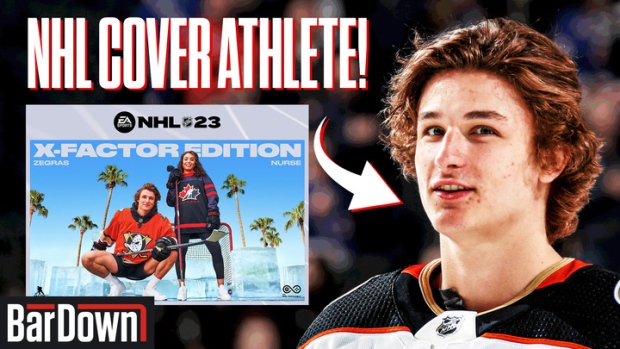 Becoming a cover athlete for an EA Sports video game is truly an honour kept for those at the top of their game. Sure, Peyton Hillis somehow found his way onto a Madden cover, but mostly the cover is saved for those that are etching their names into the ‘all-time great’ conversation.

Every year, hockey fans enjoy speculating who may be the next cover athlete of EA Sports iconic video game series. You’ll hear arguments for guys like Sidney Crosby – a legend who has never graced the cover before. You’ll hear cases made for Nathan MacKinnon or Leon Draisaitl – guys that are at the absolute top of their game.

Zegras is brand new to the NHL, having played less than 100 games in a Ducks jersey. It’s not very common you see a video game series take a chance on someone so young, but the 21-year-old Zegras is leading a revolution that champions supreme puck skills and, to be honest, general swagger.

Zegras famously recorded what is now aptly named “the Zegras assist” when he picked up the puck behind the net, flipped it to the front where Sonny Milano banged it home. He also wowed everyone at the NHL All-Star Game when he pulled off an absolutely ridiculous move… while blindfolded.

With thousands of kids now attempting to master the craft of “The Michigan” in their driveways, it was clear that Zegras’ effect on the league was being felt across the hockey world.

Recently, our own Jesse Pollock caught up with Zegras – or “Zeegs,” as Jesse has earned the right to call him, to discuss the cover and more.

While Jesse and Zeegs mostly focused the conversation on ‘Chel, Zegras also took the time to explain how impressive Sarah Nurse is, discuss the skill-based transformation going on in the NHL, and… of course… address the elephant in the room…

.@LucaCelebre21 and @jpolly22 tried their best to get @tzegras11 🔥 tape before his NHL All-Star “Dodgeball” goal 😂

Wow! Luca just getting chucked under the bus!

We’re looking forward to the day Zegras is north of the border for a preseason game. You better believe we’ll be there with a roll of flame tape.