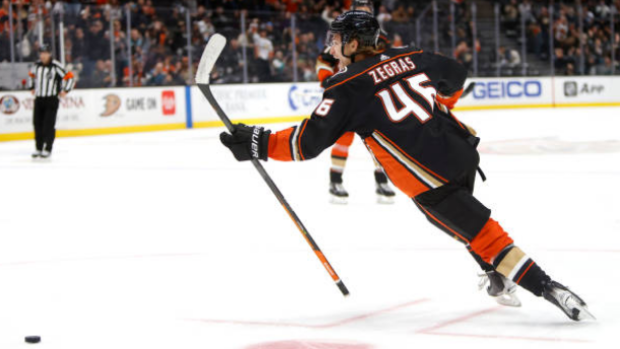 Trevor Zegras hasn’t been in the NHL very long, but he’s certainly leaving a big footprint early on. His unapologetic swagger and his undeniable puck skills have combined to make him one of the flashiest young players the league has seen in a while.

So what to you get when you put a talented, braggadocios young star into a faceoff circle with a grizzled, no-nonsense veteran like, oh let’s just say, Ryan O’Reilly? You get a one-sided $100 bet, apparently!

Zegras recently joined the Cam & Strick Podcast to discuss a variety of topics including his rookie season. While reflecting on the campaign, Zegras brought up the hilarious story of meeting O’Reilly. According to the Ducks centre, he approached O’Reilly and offered up a $100 bet on who wins the face-off. Seemingly not looking to pal around with an opposing rookie, O’Reilly just snarled back at him and took the draw.

It's safe to say that O’Reilly’s snarl was enough to make the eventual Venmo transfer a surprising one! Zegras apparently didn’t even know who “Ryan” was when he received the funds, but then remembered his on-ice moment with the 2019 Conn Smythe Trophy recipient.

We’ll certainly be watching for what happens the next time these two play. Would anyone really be surprised if Zegras brought a $100 bill to double down on the bet?