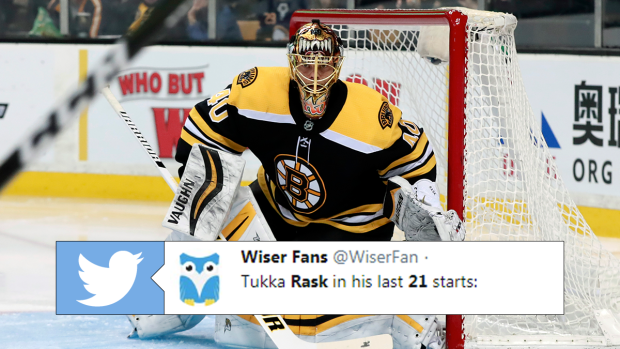 For a long time, Tuukka Rask was considered one of the best goalies in the National Hockey League.

He was a key part of the Bruins 2011 Stanley Cup run, and began to overtake another great net minder, Tim Thomas. His status as an elite goaltender began before he even reached the NHL level though. As one of the Toronto Maple Leafs’ top prospects, he won the top goaltender award at the World Junior Championship and was eventually traded to the Bruins.

Then, there was a bit of a slump (By Rask’s standards, at least).

After years of putting up superb save percentages, near .930 most seasons from 2009-10 to 2013-14, Rask was given a bigger workload and analysts began to question his ability to handle the workload of a number one NHL goaltender (Putting up a couple .915 seasons in a row). There may never have been a time it was correct, but fans in Boston were at one point calling for a change in net.

Bruins "fans" are saying Tuukka Rask is soft & bad again. So here are some numbers since he became the Bruins starter in 2013. pic.twitter.com/TKV5jrd6hA

Since then, Rask has returned to form and his career numbers remind us that he never really strayed far from the path.

Tukka Rask in his last 21 starts:

Of all goalies to qualify for the career numbers list, Tuuka Rask has the highest career SV% in NHL history. Considering most fans are starting to pay less and less attention to GAA (A stat that can be heavily influenced by the quality of team), this is pretty impressive.

Rask is 30 years old. Goalies tend to have a little more longevity than players, but it will be interesting to see where Rask ranks all-time as he enters the older years of his NHL career.

Somebody please remind him that Rask currently has the greatest save % of all time, a veznia (about to be 2), a Stanley cup and he's only 30 years old.