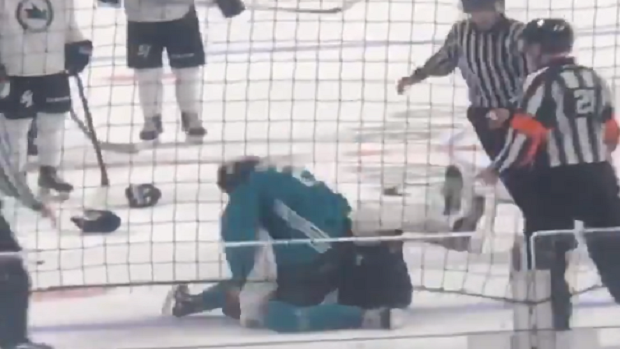 We’re not saying fighting your (potential) teammates is a good thing, but we’re also not saying it’s a bad thing.

Remember when the St Louis Blues were in last place, and then Robert Bortuzzo beat the wheels off of teammate Zach Sanford, which arguably turned around the season for the Blues?

Here’s the Robert Bortuzzo and Zach Sanford fight from practice today at the Mills. This is video of the video shot by @sharpie2626 of @FOX2now. #STLBlues #NHL pic.twitter.com/VKZu3TgqHD

Looked kind of ugly at the time, but it worked out pretty well for them.

NHL development camp is definitely a different situation, because players aren’t really on the same team yet, and are fighting to prove themselves for a chance with the big club. Still, though, these guys are tied to the same NHL organizations, and these two just took “fighting for a spot on the roster” to a new level. Two San Jose Sharks prospects dropped the mitts today in a scrimmage, and while showing your ability to fight to gain a roster spot is a dying art, these two definitely got our attention.

Hard not to notice that one, to be honest.

Bold strategy boys, and we hope you hug it out in the room after.