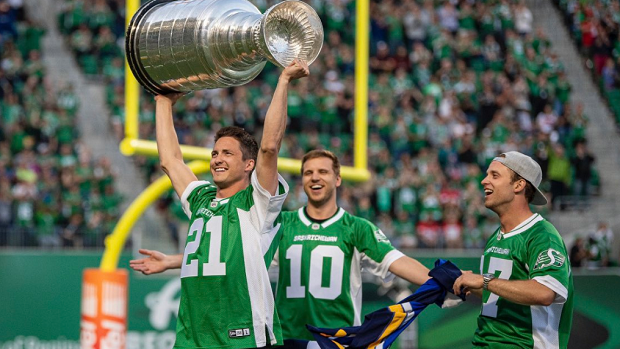 He really wanted to win a Stanley Cup.

In one of the most dazzling comeback victories we’re ever seen, Bozak and the Blues did just that, climbing all the way up the standings from last place to win a Stanley Cup.

Now, Stanley is making his rounds, and with 18 Canadians on the Blues roster, the Cup will be spending a considerable amount of time in Canada this summer.

Most recently, the Cup made a visit to Saskatchewan with Tyler Bozak, who, like any good Sasky boy, stopped by a Roughriders game with fellow Saskatchewan boys Brayden Schenn and Jaden Schwartz.

Bozak, who is a dad of two, also had the best seat in the house for his kids.

Tyler’s son, Kanon, has been a fan favourite since his time in Toronto, and he showed that he’s still the coolest dude in town sitting in the Cup, in a cowboy hat, jamming to Old Town Road.

Best seat in the house pic.twitter.com/mAvNHGp7Ix

Now THAT’S how you celebrate. To cap it all off, Bozie brought the Cup to the lake, where we really did think he was about to toss it in the water.

When you bring the Cup to the family lakehouse. #stlblues #StanleyCup pic.twitter.com/TDZjIdrqNY