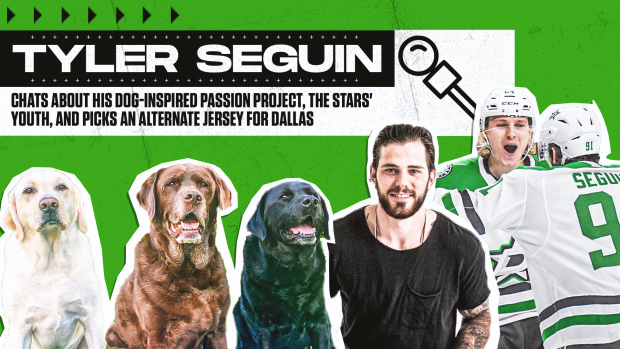 Tyler Seguin has one of the largest followings on social media when it comes to NHL players, so a lot of hockey fans know all about his three dogs; Marshall, Cash and Gerry, and know just how much they mean to him. Some of those fans might even follow the trio on Instagram, as they’re set to crack the 15k follower mark any day now on their own combined account.

After playing through a torn acetabular labrum during last year’s Stanley Cup run, Seguin was sidelined for almost all of the 2020-21 season. With delays in the surgery because of COVID restrictions and the actual time needed to rehab the injury, Seguin managed to play just three games this season, but he still returned sooner than expected and he also brought his brand new passion project, which was inspired by his dogs and his profession, to life.

I recently spoke to Tyler Seguin over the phone for BarDown to talk about his new project called The Chew Club, a dog food and toy company inspired by his three dogs, and we also discussed the Stars’ talented youth making names for themselves in the NHL and which possible Stars jersey he would want as a full-time alternate jersey.

Christian Marin: Congratulations on the launch of The Chew Club. Can you tell me a little bit more about your new company and how the idea came about?

Tyler Seguin: I call it a passion project because it’s obviously very dear to my heart having three labs and having dogs my whole life. Really since my 2nd year in the NHL, I got my first personal lab and now I have three, so like I said it’s been a big passion project. I had a lot of free time kind of once COVID hit, and then getting injured and going through the long rehab process, so to see it and be able to call it a company as of today is pretty incredible.

I had the idea of it in my head just from personal experience from always being on the road and always travelling and at the end of the day worrying about my dogs. You know, it’s tough for dogs in ways with professional athletes because they get used to us being home with them all summer long. You get anywhere from two to four months with them every day and they’re used to seeing us then when the season starts and we’re gone so much and sometimes dogs will gain anxiety or get depressed or confused, so I always just wanted a service or something that I trusted to kind of help ease that anxiety - whether it be dog toys or treats or whatnot - and having this company now, every month if you do a subscription you get a new box, because that was the idea I always had for me and my pups, so to now actually do it myself is cool to say and I’m excited for the company.

CM: What kind of difference can dog owners expect from The Chew Club food compared to other brands?

TS: First and foremost the healthiness. There’s nothing unhealthy going into our products. The monthly service of knowing that something is coming every month, it doesn’t take long for dogs to go through toys and treats so this is every month. We even have something we named PowerBones for the power chewers, that’s for some of the bigger dogs like myself who are 70lbs-plus, and it’s just a reliable one-way source to keep your dogs entertained monthly and I’m really proud of how it’s all come together.

CM: And what about the toys?

TS: A lot of things I’ve noticed with some dog toys and treats with certain companies they kind of leave a smell so having three dogs things can really stink, so our chews are made from Canadian Maplewood and there’s no smell at all, which I enjoy around the house and their breath is not as bad as normal.

CM: Can fans expect to see your dogs as the cover dog for the brand and this is their way of stepping up to pull their weight around the house financially?

TS: [Laughs] It’s hard not to make them the cover dogs with how funny they are and how much they love being on camera, so it’ll have to be that way early on.

But I can’t say that the dogs didn’t have a great time going through this process as well. We went through many treat options and different tastes and smells, they were definitely the guinea pigs, or guinea dogs, so we definitely went with the ones that really seemed to catch their eye and what they liked the most. They’ll probably be doing that in the future if we get some new lines or flavours out, I’ll make sure my dogs appreciate them first and see how fats the bones are eaten and then they’ll head out to The Chew Club after that.

CM: What’s the best part about being a dog owner and what have you learned from your three dogs over the years?

TS: I would start off with just loyalty with how they are. It’s been great for me, especially for most of my career, not anymore, but most of my career I was kind of a single guy living in Boston and Dallas, going through the ups and downs of the season and not having any family around, you know to come home to the same wagging tails and the same smiles is something you can’t make up. Another thing I love about having multiple dogs is their different personalities. They’re completely different in every way, but they’re just hilarious in their own different ways and I appreciate them in that aspect.

CM: How would you describe each of their personalities?

TS: Marshall, the oldest, he’s 11 now. I got him my second year in Boston, he’s kind of the OG. He’s just Mr. Attitude as he’s getting older now, doesn’t really put up with much. We’ll pick a spot to play on our dog walks and when he’s done walking we’re gonna know and he’s going to let us know and start barking so we’ll head home.

Cash, the black dog, he seems to be a lot of people’s favourite. He’s just easy going and just a big loving guy and when you pet him, if you ever stop he’ll start wagging his paw at you because he wants it continuously, but he’s a character for sure.

And Gerry, he’s just the energizer bunny. Honestly, even though he’s the youngest - he’s about 4, his obedience is incredible. Some younger dogs when you walk them without a leash they’ll stop or wander off but Gerry I don’t even need the leash he’s just so obedient and so loyal. But definitely the puppy of the group who never stops chasing the ball for hours and hours. We’ll have 110 degree heat here in Texas and that doesn’t stop him, he’s always going.

CM: On one of the Stars’ most recent posts asking which young gun is being slept on the most you answered “E for all the above”. We as fans have seen what they’re capable of on the ice, but was do the young guys bring to the locker room and lineup every night?

TS: The excitement. On any team you’ve got the vets and the older guys. I don’t like to call myself older being 29, but being in the league more than 12 years now you get some of those dog days in the middle of the season where they get a little bit tougher and these kids still come in with a big smile and love being in the NHL and it lights you up to see their drive and their passion for the game. They bring a lot of youth and a lot of fun to the locker room and I obviously love having them. 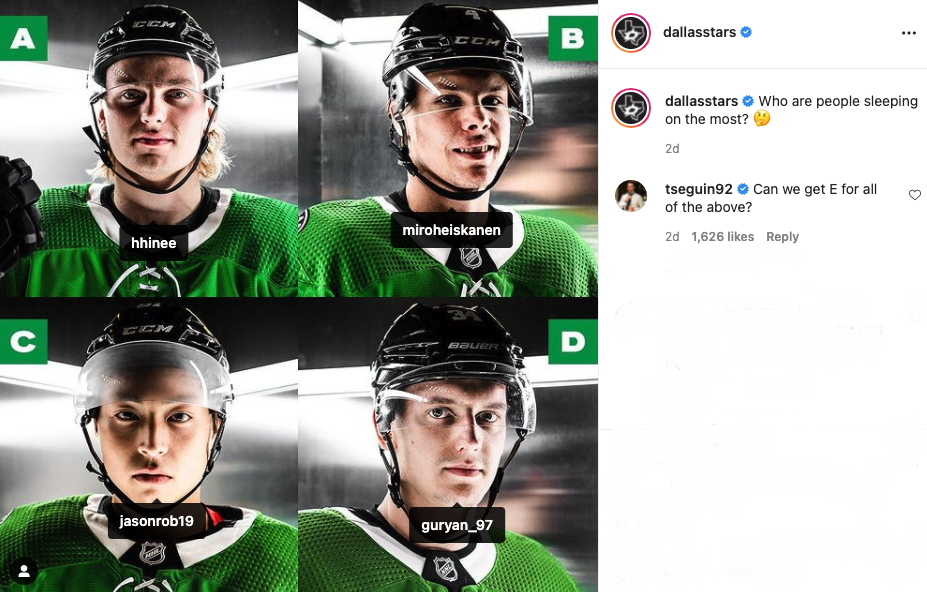 CM: If you could bring back one Dallas Stars jersey as a full-time alternate jersey, which one would it be?

TS: That’s tough. Being a spectator this past season I really liked the all-white jerseys we had. I never got the opportunity to wear them but they’re one of my favourites after watching up in the crowd. I know a lot of players also liked the bright green ones we wore last year and we might be seeing them in the future, so it’s tough to say out of those two just because I never got a chance to wear them.

Stars fans were beyond excited when they found out that Tyler Seguin was returning to action before the end of the regular season for the team’s final attempt at a playoff push, and now dogs across North America can feel that same excitement once a month all thanks to The Chew Club.