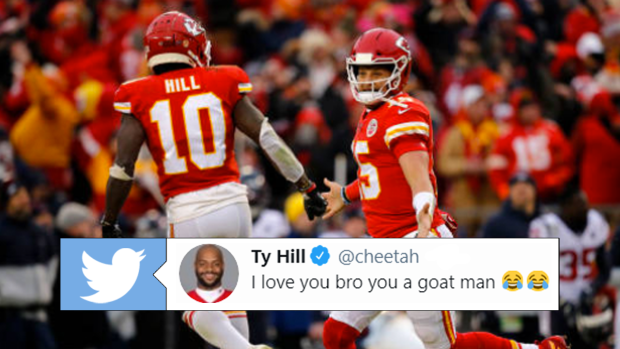 Tyreek Hill and Patrick Mahomes are one of the most lethal receiver/quarterback combinations in the NFL. The two have connected on so many deep balls it’s enough to give defensive backs nightmares. They’re also fresh off their first Super Bowl titles, so yeah… they’re pretty good!

According to Hill, this was all a surprise to him. Speaking on Inside the NFL, Hill revealed that he wasn’t a big fan of Mahomes when the now-highest-paid-quarterback-all-time was first drafted. In fact, he went as far as to say his first impressions of Mahomes were that he was “trash.”

“I thought he was trash. I ain’t gonna cap.” @cheetah's first impression of Mahomes is comedy 💀 @brgridiron

It didn’t take Mahomes long to respond, but Tyreek quickly made sure to clarify the love he has for his QB.

With Mahomes sticking around for the long haul, these two could be tearing up Arrowhead and the AFC West for a long, long time.

(H/T Inside The NFL)