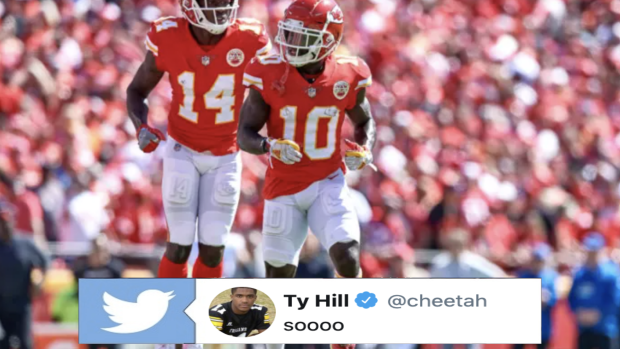 NFL on CBS came out with a list for most rec TD in NFL history for players under 5'9" and some people had some qualms with the list, those over 5'9" and specifically Tyreek Hill.

Known for bragging about being 5'10" and listed as such on his stats, this seems to be the first battle he's lost for exaggerating his height, or was he? It's hard to tell, photos, himself, fellow players in the league and stats all say differently!

He still wanted to be acknowledged on this list, replying to the tweet as if he was mistakenly left off.

He did get called out by fans for being over the height criteria to even be able to make that list, although not everyone thinks the stats or himself are telling the truth

when saying your 5ft 10 comes back to bite ya

The cheetah listed at 5”10 according to google

And just when we thought we'd never know, he tweeted his height... BUT it's still up for debate. We need the truth!