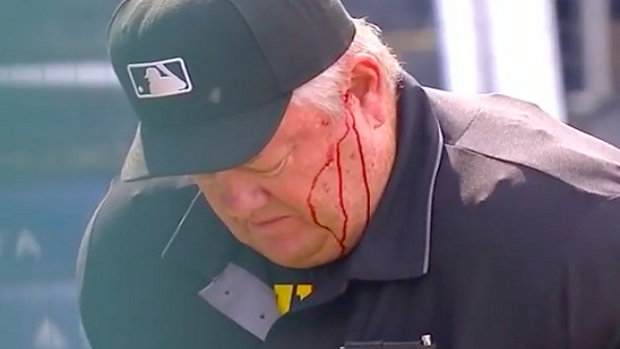 If you’re an umpire you need to be alert at all times during a baseball game, because sometimes just blinking might make you miss something.

Home plate umpires are as close to the play as possible, which means they run the risk of getting hit by a foul ball or a flying bat.

On Thursday during the Toronto Blue Jays and Washington Nationals game, home plate umpire Joe West ended up on the wrong end of a flying bat that smoked him in the side of the head.

Joe West, 67-year-old home plate umpire, had to leave the game after getting hit in the side of the head with a bat in the first inning. He later returned and finished the rest of the game at third base.

Bo Bichette’s bat ended up flying back as he made contact with the ball and ended up swiping West’s head, causing him to bleed. The 67-year-old umpire was forced to leave the game to get looked at, but returned later on in the game and finished the game as the third base umpire.

Whether you like the guy or not, it’s scary to see someone take a bat to the head. Fortunately he was alright and didn’t suffer any serious damage.