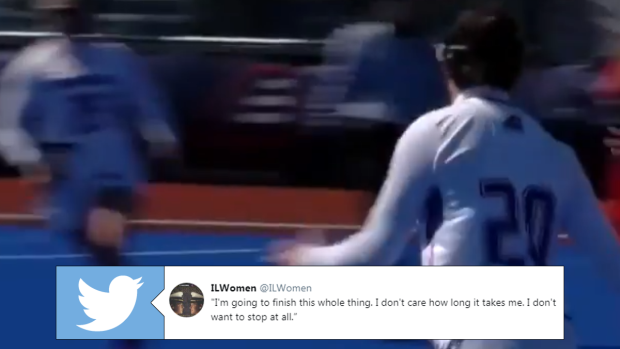 One of the most valuable traits an athlete can have is the ability to persevere. Noelle Lambert, a women’s lacrosse player for the University of Massachusetts Lowell, knows that all too well.

Lambert lost her leg in a moped accident when she lost control and veered into a dump truck. Among the shock of a serious leg injury, one of the first places her mind went was to her sport.

The following is an excerpt from the Washington Post:

"I remember hitting it, and then being on the ground. I looked down at my leg, and it was gone,” she said. “Obviously, lacrosse was one of the first things I thought of, that I was never going to be able to play again.

“The guy that was driving behind us was the first one to come toward me, and he took his shirt off and wrapped it around my leg, which basically saved my life, because I hit a major artery. I remember them saying, ‘Everything’s fine, you’re gonna be okay,’ and I said, ‘No, my leg is gone.’ ”

The injury instantly changed her life forever, and her athletic career was dealt a serious blow. Against the odds, Lambert spent the next two years trying to get back on the field. On Saturday, she completed the inspirational journey by taking the field and scoring a goal in her first game back.

After losing her leg in an accident nearly two years ago, junior Noelle Lambert returned to the field and scored a goal for @RiverHawkWLax. pic.twitter.com/OMWxrN0H0z

A journey like this inspires the old adage that anything is possible. Lowell would score many more goals that game, as they won the game 16-1, but no goal was quite as memorable as Lambert’s.