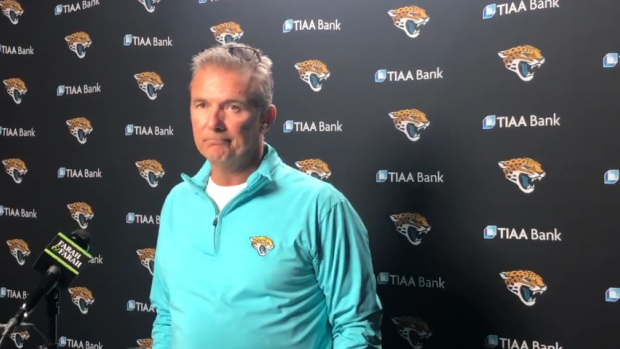 When former Florida and Ohio State coach Urban Meyer decided to make the jump from College Football to the NFL, fans were… unsure. CFB is a much different coaching experience, and the football world wasn’t quite sure if Meyer’s success at the collegiate level was going to properly translate over to his new NFL squad; the Jacksonville Jaguars.

It’s too early to make any final conclusions, but the early returns certainly haven’t been in Meyer’s favour.

Meyer first made waves on Draft Day when he used two first-round picks on offensive players. The Trevor Lawrence #1 overall selection is what everyone wanted, and everyone expected, but it was the Travis Etienne choice at #25 that had fans scratching their heads. The Jags already have 2020 breakout James Robinson at running back, and could they really afford to pass up on a premium defender with their current defensive unit?

Through the rest of the offseason, training camp, and the preseason, fans continued to question Meyer’s decision making. Was Tim Tebow actually at Jags’ camp until recently, or was that just a mirage?

None of that really matters if you win in the regular season. The only issue is that the Jags lost their Week 1 matchup. It would have been more understandable had it not been a total blowout at the hands of the consensus worst preseason team Houston Texans.

And then, all of a sudden, the laughter promptly stopped as a premium head coaching position opened up at USC following the firing of Clay Helton. Could Meyer actually be interested in leaving the NFL to head back to his college kingdom?

Rumours were EVERYWHERE. Some outlets were saying that Meyer’s heart wasn’t quite in the Jags’ job, while others straight up determined it to be the right move for Meyer. The memes began flowing and so commenced an ideology formed in the throngs of social media.

Gators and Jags beat reporter Demetrius Harvey finally had the chance to ask Meyer about the rumours, and Meyer hardly let the question finish before squashing the idea.

Is this what Jags fans wanted to hear? I mean, it’s nice to hear that there’s a loyalty there, but is this a situation that will get better with time? The Jags looked absolutely awful on Sunday, and you could very well argue that the rest of the season’s opponents will be much tougher than the Texans.

Time to strap on your big boy pants, Urban. Welcome to the NFL.