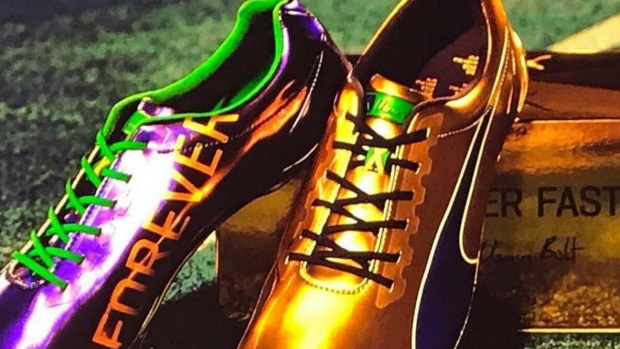 Saturday, an era comes to an end as Usain Bolt will compete in the final 100m race of his career.

Usain Bolt is into the 100m final at the IAAF World Championships.

He finished 2nd in the semifinal heat behind American Christian Coleman.

Here are some other angles of the Usain Bolt and Christian Coleman stare at the end of the 100m semifinal. (via Getty Images) pic.twitter.com/39QzAgOm5P

Bolt qualified for the final at the World Athletics Championships in style, and what we mean by that is the shoes he's wearing for his final race(s) in London are absolutely incredible.

As you can see, the right shoe has the word "Forever" on it and the left has "Fastest" on it.

Those two words aren't even the best part of the shoes, though.

No, the inside of Bolt's shoes are a reminder of how much winning he's done over the course of his career.

In honour of his last 100m race, Gatorade honoured Bolt with an video that will give you goosebumps.

Even if he somehow doesn't win this event, Bolt's legacy as the fastest man alive won't change.

Now that he's set to be out of the sport, though, there are other stars looking to take his place.