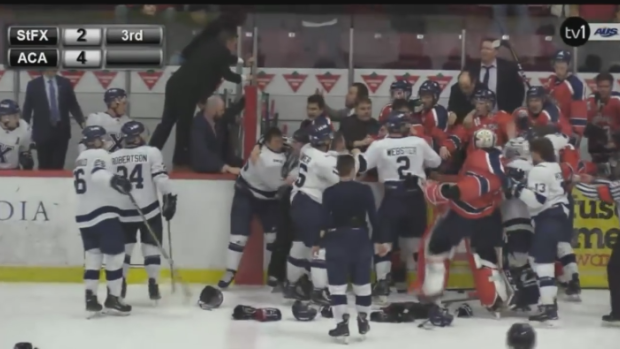 During a Saturday night USports matchup between the Acadia Axemen and St. FX X-Men, the two AUS rivals let their emotions get the best of them when a major brawl broke out mid-way through the final period.

In what was a potential first-round playoff match-up the Axemen were able to defeat the X-Men 6-3.

Game recap as the Axemen prevail 6-3 over StFX on Saturday night in Wolfville. Jordy Stallard had 4 points in the Acadia victory. https://t.co/bF2119H4m1

But the biggest takeaway from the game was the brawl that broke that resulted in both coaches being ejected, 13 total players and a total of 310 penalty minutes assessed.

A 10-minute misconduct issued to Anthony Difruscia just over five minutes into the period seemed to set the tone. After Acadia's Liam Maaskant scored to give the Axemen a 4-2 lead, some stick work prior to the draw ignited what turned into a slugfest that spilled over into Acadia's bench.

*Warning, some of the language in the videos below is NSFW.*

As per the USports playing regulations, any player that receives a 10-minute fighting major is ejected from the game and handed a one-game suspension.

The third-period penalty summary of the shenanigans speaks for itself.

The game had to be delayed for approximately 20 minutes as the refs sorted out the penalties.

We have a mass brawl in the benches.. this is not good, sticks flying,things have gone off the rails...

Hoyles is losing his mind for StFX being chased around by a linesman now he jumps back at the Acadia bench.. this is something else...

I have no idea what happens next after that... that was pure pandemonium as Spears jumped Southam at centre ice, and then things just went wild. pic.twitter.com/kCJ34VChJv