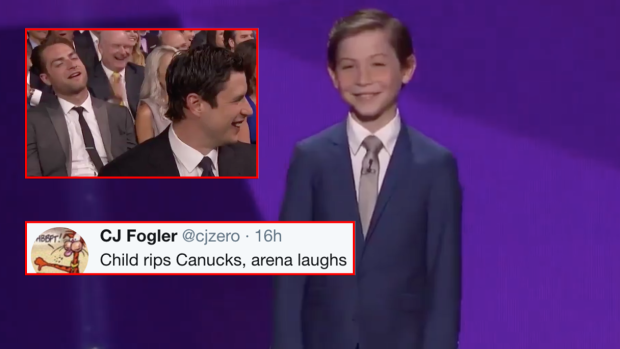 Being a Vancouver Canucks fan isn’t easy these days. After finishing the last two seasons 29th and 28th, respectively, Canada’s west coast team is officially going through the trials and tribulations of being a bottom feeder in the National Hockey League.

10-year-old Jacob Tremblay, who stars in The Book of Henry, knows the pain and suffering Canucks fans are enduring.

Born in Vancouver and raised in the nearby suburb of Langley, B.C., the child actor took some shots at his hometown team with a delightful weep of sadness at the NHL awards on Wednesday night in Las Vegas. Tremblay was on hand to present the Bill Masterton Award to Senators goaltender Craig Anderson.

Here's all the Canucks jokes from the young Masterton trophy presenter pic.twitter.com/OzqLHMZI6a

As you can imagine, the reactions on Twitter starting pouring in.

Jacob Tremblay is a Canucks fan? Now I know how he has such a deep well of sadness to draw from when he's acting.

I'm among the most loyal and passionate #Canucks fans around...yet I had no problem with Jacob Tremblay's joke.

But a lot of people do!

It wasn’t the first time Tremblay professed his love for the team. At the 2016 awards, Tremblay presented the Calder Trophy to Blackhawks winger Artemi Panarin wearing a Canucks jersey.

The Canucks will be the first Canadian team to select in Friday’s entry draft after finishing the campaign with the second best lottery odds.

Fans of the blue and green hoped they’d be selecting atop of the draft, but they still should get an impact player with the fifth overall selection. No players were up for any of the awards, but the team was still in the spotlight thanks to Tremblay’s jokes. Any publicity is good publicity, right Canucks fans?