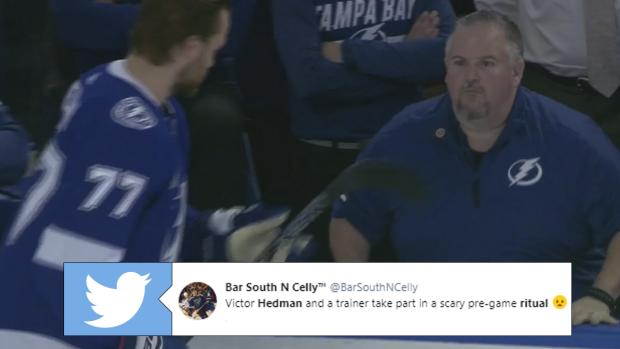 Pregame rituals run rampant through sports. On game day, athletes don’t just wing it until they hop on the ice, the court, the pitch, or any other playing surface. They have a very specific routine that cannot be messed with. For some it’s as simple as a nap or a specific meal, but for others it gets pretty specific.

Victor Hedman is one of the top defenceman in today’s NHL. His balance of vision, shot, physicality, and hands help to make him a force on the blue line. With such a well-balanced arsenal of talent and capability, does that mean he doesn’t need superstitious or routine rituals?

In fact his routine is one of the more questionable in the league as it involves putting another member of his organization in harm’s way. Apparently before each game, Hedman gets his equipment manager to spread his hand out on top of the bench-side boards. Then the hulking Swedish blueliner takes his stick to it in some sort of challenge. Broadcasters picked it up ahead of Tuesday night’s game

It doesn’t help that the man (victim?) looks absolutely terrified as Hedman tries to get his attention. Afterwards they do a little shoulder bump and Hedman skates on his way.

The real question, how many times has this equipment manager had to deal with an unfocused Hedman accidentally slashing the poor guy in the hands.

Speaking of this pirate-with-a-knife kind of challenge, Hedman actually makes a pretty good pirate (although maybe not quite as good as Erik Karlsson)

Hopefully Hedman doesn’t get his hands on a knife or that equipment manager may just run for the hills.