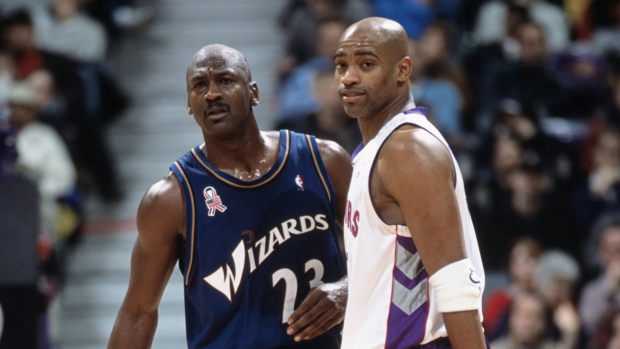 In 2003, Vince Carter was in his fifth year in the NBA, and already well into his prime with the Toronto Raptors. That year’s All-Star Game would be his fourth inclusion on the team, out of a total eight, and he was simply one of the league’s most electrifying players.

Michael Jordan, meanwhile? Well, even at the age of 39, he was still an All-Star, averaging 20.0 points per game for the Washington Wizards, and with that year being his last in the NBA, VC demanded that MJ take his starting spot.

Vince Carter paid tribute to Michael Jordan in a big way. (via @aardodson/@undefeatedespn)

As Carter tells Aaron Dodson of The Undefeated, he had originally hoped that MJ would get voted in as an All-Star starter, but he was more than willing to give up his own spot to give MJ a proper send-off.

In similar situations this year are Dwyane Wade and Dirk Nowitzki, both NBA all-timers who are retiring after this year and were named as honorary All-Stars for this Saturday’s game — and we wonder if any of this year’s starters will give up their spot for Wade and Dirk.

Unlike those two, Carter hasn’t revealed his own retirement decision yet, and he’s played coy about that for some time now. It seems like every year feels like VC’s last, and yet, here he is today as a 42-year-old with the Atlanta Hawks, still chipping in off the bench as an above-average outside shooter. Maybe his own year as an honorary All-Star is still to come.

For now, why not relive Carter’s glory days and get yourself ready for tomorrow’s NBA dunk contest with this impromptu dunk-off from his Raptors days, with his cousin and then-teammate Tracy McGrady?