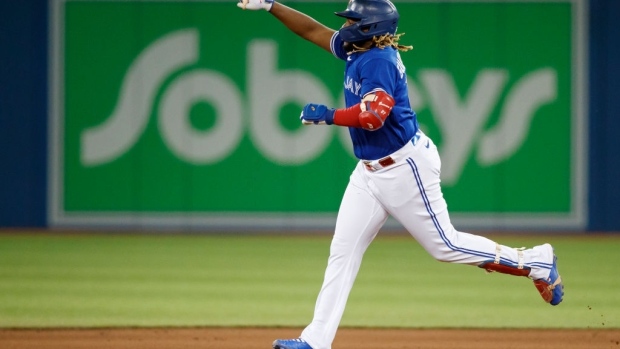 First and foremost, we need to start this article by just taking a moment to think about Vladimir Guerrero Jr.

What an absolute force to be reckoned with the Blue Jays young slugger is.

If the 22-year-old hasn’t found a way to wow you yet (which we can’t see even being the case for anyone) then Monday night’s matchup against the AL East-leading Tampa Bay Rays definitely will change your mind.

In the first game of their series against the Rays, the Jays not only won but they absolutely dominated to show their strong potential for the postseason, with Vladdy Jr. himself taking the league home run leader title, passing Los Angeles Angels star Shohei Ohtani with 45 HRs.

Guerrero Jr. passed his father, Vladimir Guerrero Sr.’s single-season record of 44 home runs back in 2000 with the Montreal Expos.

This kid is only getting started and getting more and more exciting to watch.

So now time will tell if Vladimir Guerrero Jr. will not only continue to hold the league title but will he win the Triple Crown?

Do you think Vladimir Guerrero Jr. will win the Triple Crown? 🤔

Let us know what you think!