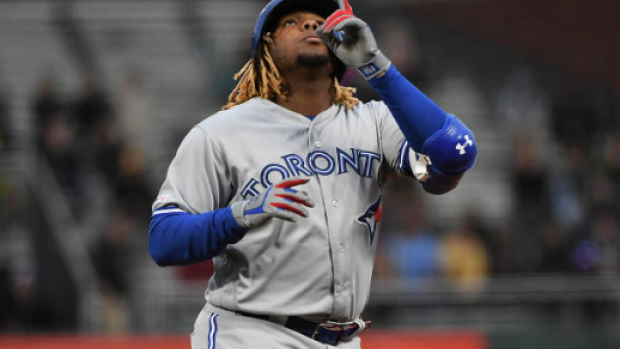 It took him until his 16th career game in the big leagues, but Blue Jays 3B Vladimir Guerrero Jr. finally crushed his first ever homer.

Kicking off a two-game series against the San Francisco Giants, Guerrero Jr. clubbed a first-inning homer to straightaway centre field of Nick Vincent that travelled 438 feet.

We had to wait a while for it, but Vlad Jr.'s first MLB home run was destroyed.

You can watch the homer here.

Later on, Vlad would then smash a ball out of Oracle Park once again.

Sittin 2-2 on the night with a walk, Vlad crushed a three-run dinger that travelled 451-feet - the longest homer a Blue Jay has hit this season.

Making more history, the son of Montreal Expos legend Vlad Sr. became the youngest AL player to homer twice in a game since Manny Machado in 2012.

Vladimir Guerrero Jr. is 3-3 with a walk tonight after clubbing his 2nd career homer, a three-run shot.

Vladdy's 2nd HR was a 451-foot bomb and is the longest home run a Blue Jay has hit this season. pic.twitter.com/mecRvCQFDo

Vladimir Guerrero Jr. is the first Blue Jays player, in 5 years of Statcast tracking, to hit two homers of at least 110 mph in the same game. pic.twitter.com/mch5W29vqc

Vlad Jr.'s batting average now sits at .240 on the season, as the young star appears to be heating up after a miserable start to his career.

Vladimir Guerrero Jr. putting on a show for the @BlueJays in San Fran, as he's become the 4th youngest player in MLB history to get at least a walk, 2 home runs, 3 hits & 4 RBI in the same game

#VladJr hit his first two homers at the same stadium where his dad won the 2007 Home Run Derby.

Baseball is the best. pic.twitter.com/DaaqDQKq3Q