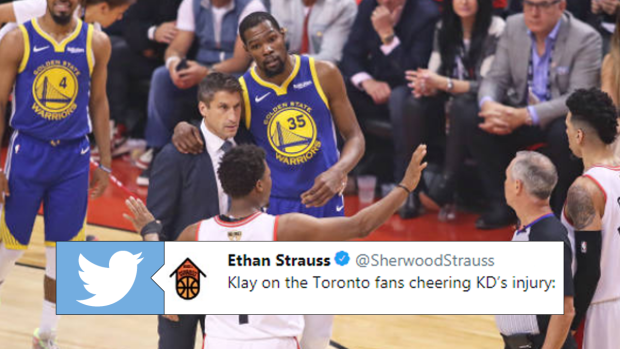 Throughout the entire NBA Playoffs, Toronto Raptors fans seem to have been working their way into the hearts of other NBA followers in general with their politeness, dedication, and extreme passion.

That reputation took a hit during Game 5’s loss, as the fan base received backlash for cheering after realizing Golden State Warriors star Kevin Durant had re-injured his leg.

There is a lot to pick apart in this situation. Some say the cheering was at least partially directed towards the steal/layup the Raps got out of the moment. Others believe it wasn’t the whole building, and that they were chanting KD as he left.

A lot also believe that fans were cheering at the immediate excitement that it strengthened their odds at a Championship, rather than at the injury itself. Others also bring up points that other fan bases would have done the same, or that the Warriors fan base cheered when Kawhi Leonard was injured in Oracle Arena years ago.

There were a lot of opinions, but one thing was clear – everyone agrees that regardless of reasons, it is wrong to cheer for an injury. It’s made worse by the apparent severity of the injury, as it is believed KD tore his Achilles. That is a potential career-altering injury to one of the league’s greatest players.

While reaction has been all over the place, the Warriors were pretty consistent with their reaction. They were shocked, and they were angry.

#Klay didn’t hold back when talking about Scotiabank Arena during the #Durant injury.

DeMarcus #Cousins was not happy with #Raptors fans for cheering during #Durant’s injury.

Steph Curry didn’t lash out in the same way, and he gave a very reasonable answer, but he didn’t refrain from calling it “ugliness” either.

.@StephenCurry30 shares his thoughts on the reaction from the Raptors fans to Kevin Durant’s injury. pic.twitter.com/lqucDd1nUm

Raps players also touched on the issue, expressing condolences to Durant and explaining their stance on the situation.

Kyle #Lowry weighs in on Kevin #Durant’s injury and the reaction from #Raptors fans.

#KawhiLeonard has been in Kevin #Durant’s shoes before.

#Drake showed Kevin #Durant some love as KD was leaving the game with an injury. . (🎥: @espn)