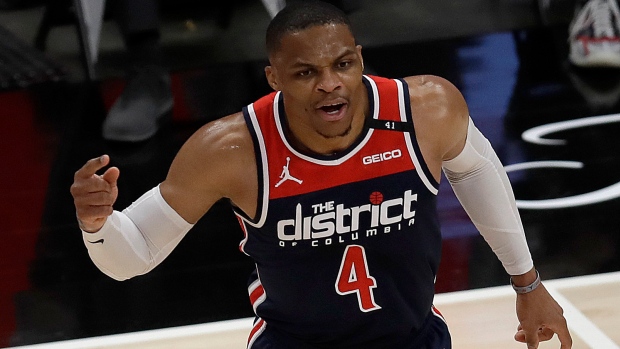 Russell Westbrook jumped up for an uncontested defensive rebound with 8:30 remaining against the Atlanta Hawks on Monday and leaped past Oscar Robertson in the history books to become the NBA's triple-double king.

That simple rebound in the fourth quarter of the Wizards' 125-124 loss at Atlanta completed a history-making triple-double that snapped a record many thought was previously unattainable and had stood since Robertson recorded his 181st triple-double on March 24, 1974. Robertson had been the all-time leader in the category since he took the lead during the 1961-62 season.

"It's just a blessing," said Westbrook, who singled out his first triple-double against Dallas as the one that stands out the most to him. "You put so much into the game, so much time, you sacrifice so much, to be able to just be mentioned with guys like Oscar, Magic [Johnson] and Jason Kidd, those guys, is something I never dreamed about as a young kid growing up in L.A. Truly grateful for moments like this.

"Normally I don't like to pat myself on the back but tonight I will. Just because I am so grateful for the ones before me and so blessed."

While Westbrook missed a potential game-winning 3 at the end that would have given the historic night a storybook ending, the 6-foot-3 point guard with the relentless motor fueled by doubters and critics now has done something no one has ever done. Westbrook, 32, is all alone at the top of this statistical category, and his triple-double assault is far from running out of gas.

"I never really thought about it honestly," Westbrook said when asked when he thought he could realistically catch Robertson. "I just kind of go out and play and every night I try to do things that people say can't be done.

"My motto is 'Why not?' That's how I live and that's how I think. Each and every time I step on the floor, I try to do things that people said I can't do over the years and proving people wrong."

The Wizards released a video featuring reaction and congratulations from some of the greatest to ever play the game, starting with Robertson.

"I'm very happy for you," Robertson said in the video. "Your family is very proud of you. And I salute you for all your accomplishments in the game of basketball."

Westbrook tied Robertson on Saturday when he had 33 points, 19 rebounds and 15 assists in an overtime win over the Indiana Pacers. He also sealed that victory with the go-ahead free throws and a game-clinching block at the end in overtime.

Robertson, Johnson (138), Kidd (107) and LeBron James (99) are now the men who follow Westbrook in the top five of most career triple-doubles.

"You know I know how hard it is get a triple-double," an excited Johnson said in the video. "And the fact that I couldn't even pass Oscar Robertson, you did something I couldn't even do and I am proud of you."

Kidd gave Westbrook a new title to go by.

"What a feat," Kidd said in the video. "Incredible. You left me a long time ago.

"But you are going to go down as Mr. Triple-Double."

Despite starting the season off battling injuries and then enduring a COVID-19 outbreak on the Wizards' team, Westbrook has turned his first season in Washington into a historic one.

The last time an all-time NBA record was broken was when Ray Allen passed Reggie Miller on the all-time 3-pointers made list in 2011.

"It speaks to your relentless work ethic," NBA commissioner Adam Silver said in the Wizards' video. "And the all-around skill and passion that you bring to the game every single night."

Westbrook took time after the game to thank his wife, his kids, his mother, father and brother, who were all featured in the video. He also went out of his way again to thank the greats who played before him, especially Robertson.

"Special thanks to my family," Westbrook said. "... My wife, my kids, my mom, my dad, my brother, sacrifices they have done don't go unnoticed.

"I'm super grateful, especially for Oscar," Westbrook added. "He paved the way for guys like myself, he endured different things back in the time when he was playing where he was able to do that and still be effective on the floor... I just want to thank him because without him and things he did for the game, I probably wouldn't be able to do some things now."

Westbrook, who averaged a triple-double this season for the fourth time in his career, said he did not know how far he can take his record.

"Through the good, the bad and the ugly, I always stay true to myself," Westbrook added about his mentality. "I will never change because I have been blessed to be able to play this game at a level that nobody else can play at. And I won't stop until I can't play no more."