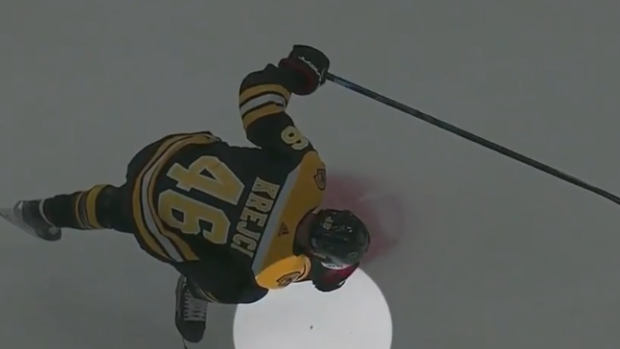 Johnny Boychuk hasn't played for the Boston Bruins since the 2013-14 season, but he sure came up with quite the assist for former teammate David Krejci on Thursday night.

In the second period, the Bruins centre was rocked by Islander defenceman Thomas Hickey. Krejci didn't come out on time to start the third period, and after a camera caught Krejci losing a tooth on the hit, Boychuk decided to pick up the chiclets and personally delivered it back over to bench he spent six seasons sitting on.

Johnny Boychuk picked up David Krejci’s lost teeth and hand-delivered them to the Bruins bench pic.twitter.com/b9f1B3jBoq

Surely Boychuk would've stuck up for Krejci over the years, and being the playmaker Krejci is, he surely helped Boychuck pad his point totals, so it's only fair that Boychuck returned it back to the rightful owner.

Cassidy on Boychuk bringing teeth back to Krejci: "I love Johnny. He's a good guy... but that's weird."

Krejci was able to return, and the Bruins went on to win in a shootout 2-1.