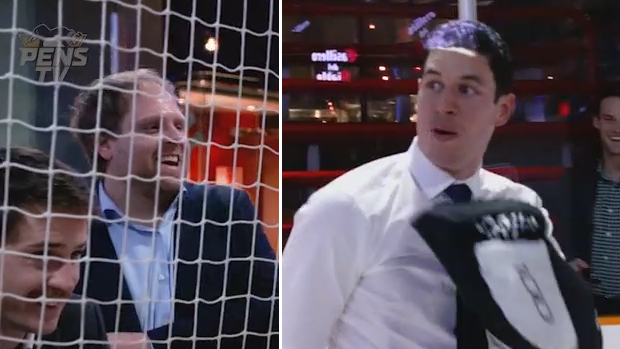 Sidney Crosby seems to have a fascination with the goalie position, because more than most players he’ll get between the pipes frequently when not in the NHL.

When he was on the Dan Patrick show in June, he even said that he wanted to be a goalie early in his hockey career. He even said that he’d love to be the emergency goaltender when the Pens were running low on goalies last year as well.

Well, he was back between the pipes at the Hockey Hall of Fame in a game against a virtual Alex Ovechkin, and this time, Ovechkin came out on top. Phil Kessel made sure to let Crosby know that was the case.

"He just lit you up" - Phil Kessel 😂😂 . A virtual Ovechkin got the best of Crosby in this Hockey Hall of Fame goalie game. . (Via: @Penguins/Inside the Room - Episode 3)

As you can see towards the end of that clip, some other Penguins tried out the game as well, and Evgeni Malkin seemed to find a way to beat the system. This wasn’t the first time that Malkin bested Crosby recently, as he also just edged him out at the finish line of their Zamboni race.

Either way, Crosby had a good time at the Hall of Fame, especially when he was checking out some legendary sticks in a tour of a back room.