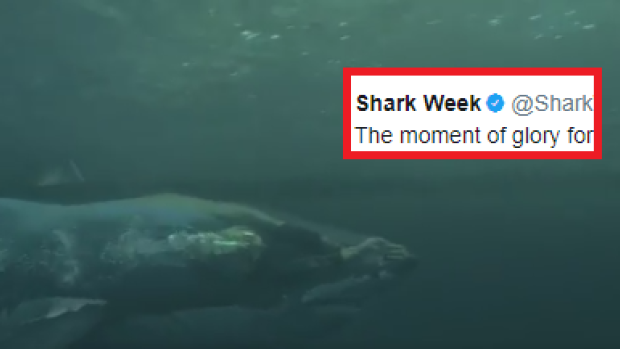 Yes! This is happening. ReTweet if you're watching #PhelpsVsShark tonight at 8p! #SharkWeek pic.twitter.com/tJP8AGWCKI

It would have been nearly impossible for Phelps to win without some sort of assistance, so the 32-year-old was given a fin of his own to help glide through the water more easily.

rt if you would cop those Michael Phelps shark fin shoes pic.twitter.com/9QIvEsF4Bo

instead of actually squaring off head-to-head, both 'swimmers'' times were recorded separately. According to The Hollywood Reporter, CGI was used to make it look as if the two were directly racing against each other. However, that was not the case.

Here is how everything panned out.

Close, but no cigar.

It didn't look easy to bring the whole race to life, but Discovery's people made it happen. Here's a look at the behind the scenes action.

Michael early morning in Mossel Bay on the way out to come face to face with a white shark #sharkweek pic.twitter.com/XlDb28F0OR

How do you capture slowmo of Michael Phelps? A cinematographer with an epic setup and quirky moustache of course #sharkweek pic.twitter.com/VBwHqiDxuK

Maybe one of these next time 😜almost MP ! TG pic.twitter.com/Qcse7yKoWN

A speed of 5.9 miles per hour is very admirable, but you’ve got to think that the race could have been closer had it taken place during Phelps’ prime.

Who knows how that one would have panned out?