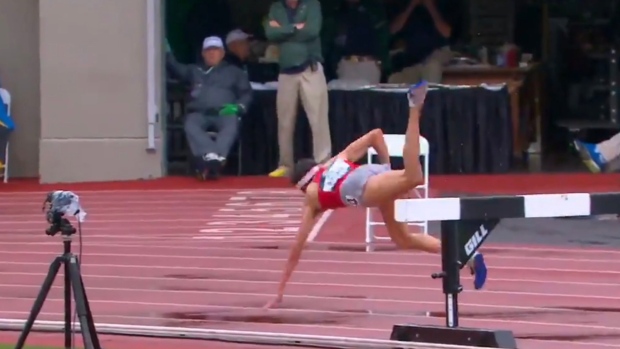 To be good at a sport such as steeplechase, which literally places adversity in your path as you compete against a number of competitors, you train and train and train. At a fundamental level, you’re not training to clear hurdles, but you’re training to clear them faster than the other guys. Actually clearing the hurdles is basically an afterthought by that point.

Not for Houston’s Brian Barraza, who, unfortunately, blew a significant lead in the last lap of the NCAA steeplechase final by eating track (catch the replay at the end of the clip, too):

Brian Barraza of Houston really went for it in the men's steeplechase final. Took an unfortunate fall in the bell lap. Dang. pic.twitter.com/ex2ZxuOqxq

Man. For an obstacle that’s physically placed in your path for the purpose of being cleared, that’s one way to lose that you really don’t see coming.

Barraza wipes out roughly 7 minutes and 38 seconds into the race, and to illustrate how close he came to winning it all, the eventual champion, Obsa Ali, won the race after finishing with a time of 8:32.23. Barraza, meanwhile, finished tenth.

His running coach, however, wasn’t deterred from taking pride in his athlete’s accomplishments:

I’ve never been more proud of an athlete in my life. @BRazzleDazzle5k ran with guts. Led 2700m of the national championship. From the gun. Unfortunate fall but this kid is amazing and will accomplish incredible things on an off the track. pic.twitter.com/6SFOZ0BAv3