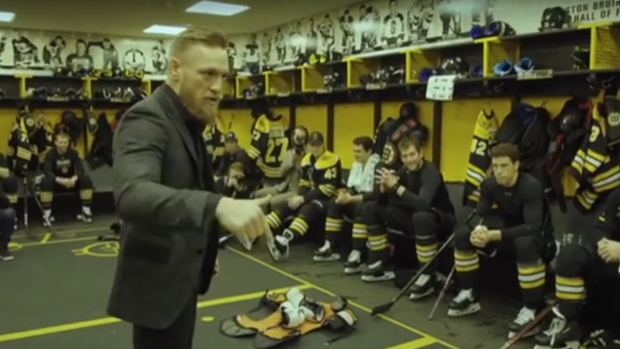 After beginning his day with a St. Patrick's Day celebration in Chicago, Conor McGregor made the trip to Boston for a classic entrance and puck drop.

Before the teams took to the ice, however, McGregor swung by the Bruins locker room first to deliver an incredible pre-game pep talk. Just as you would imagine, McGregor brings the energy.

Conor #McGregor was bringing the ENERGY in his pep talk for the #Bruins 🔥 • (🎥: YouTube/TheMacLife)

While somebody remarked that the Bruins looked more amused than pumped up by McGregor’s speech, McGregor fired back with an incredible defense of the Bruins. They are, apparently, men like Batman.

Conor #McGregor clapped back with an incredible defense of the #Bruins 👀

Anyway, McGregor’s speech seemed to do the trick for Boston. Although they needed overtime against the Blue Jackets to do it, the Bruins were able to snap a three-game losing streak, and Brad Marchand busted out the McGregor strut after potting the OT winner — it was only fitting.

With the @thenotoriousmma in the house, #BradMarchand does the #McGregor strut after scoring the OT winner! • (🎥: NESN)