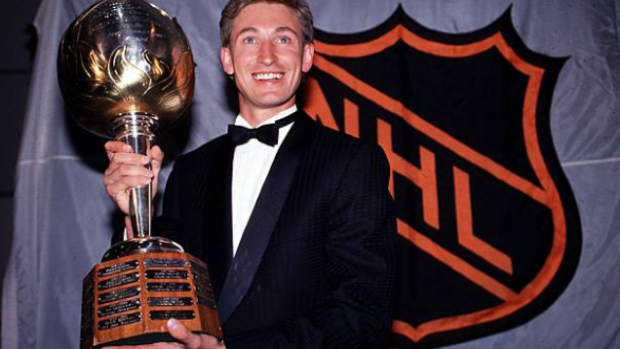 Wayne Gretzky knows a thing or two about winning the NHL’s most prestigious awards and trophies.

The Great One managed to win four Stanley Cups with the Edmonton Oilers, 10 Art Rosses as the league’s scoring leader, two Conn Smyth’s as the playoff MVP, and nine Hart trophies as the league’s most valuable player in the regular season over his illustrious career.

The NHL’s all-time leading point getting and goal scorer spoke with the NHL on the list of potential players that could walk away as the league’s MVP at the NHL Award Show in Las Vegas in June.

Will it be Nathan MacKinnon or Taylor Hall, who both put their respective teams on their backs and carried them into the post-season? Will it be Connor McDavid, who finished as the NHL’s leading scorer for the second straight season, but missed the playoffs wiht the Oilers? Or will the award go to Nikita Kucherov, who many considered to be the favourite for a good portion of the season.

Who should win the Hart Trophy? 🏆

In The Great One's eyes, there are many deserving candidates. #NHLAwards pic.twitter.com/GoNvnbTfRs

Gretzky is technically an Oilers employee, so perhaps that’s why he didn’t exactly anoint a potential winner. According to No. 99, each player deserves to win it, but considering he listed MacKinnon and Hall first, perhaps No. 99 is leaning towards one of Hall or MacKinnon.

Who do you got winning it? Will it be the same trio that was voted by the players as the Ted Lindsay nominees?

The votes for the 2017-18 Ted Lindsay Award are in. The players have selected Taylor Hall, Nathan MacKinnon and Connor McDavid as the three finalists. https://t.co/JrngTVMuyg #TLA #NHLPA pic.twitter.com/5Sd16msYdm

One thing that is for sure is that the winner will likely be a former first overall pick.