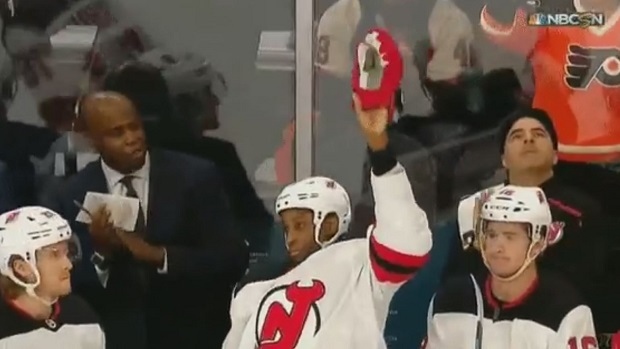 When the Philadelphia Flyers traded Wayne Simmonds to the Nashville Predators last season it kind of felt like the end of an era in Philly. The 31-year-old truly is the definition of Flyers hockey and was a key piece of their core for many years, but now he’s doing his thing with the New Jersey Devils.

On Wednesday night, Simmonds made his return to Philadelphia for the first time since he was traded and you can bet there were a lot of fans happy to see the Wayne Train back in town; even if he wasn’t in Flyers threads.

The Scarborough, Ontario native played 584 regular season games in a Flyers uniform over the course of eight years, so you knew the team was going to do something special for his first trip back. During a break in the action, the Flyers played a video tribute for Simmonds on the jumbotron and it concluded with the fans giving him a massive standing ovation and applause.

Standing ovation and loud cheers for Wayne Simmonds in his return

Every player with stick taps

#NJDevils Wayne Simmonds shows his appreciation for his years as a Flyer: pic.twitter.com/AmAAl4pQ2h