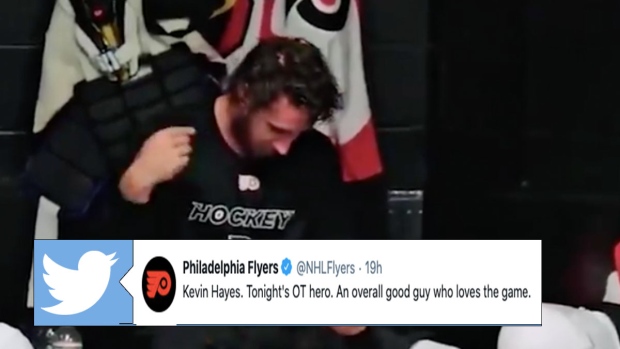 Kevin Hayes is a confirmed good guy in the NHL, and if you didn't know that before, then you should have learned it when he vouched for Gritty (and the rest of the league's mascots, for that matter) to be allowed into the venue when the Flyers play this season.

Big decision to make! If @GrittyNHL is not allowed in the building for games then I don’t think I can play this year! #GetGrittyIn

In addition to that, he also does baby announcements!

Flyers center @KevinPHayes12 does it all: scores SHGs and OT winners, gets a beer named after him and breaks the news to @FlyersWarrior player Kyle Hoffman that he is going to be a new uncle!https://t.co/HznORNkGqj

What a great guy, right?

Hayes is notably one of the best characters in hockey, and we're glad he knows it. He's off to a smashing start this season with 10 points in 10 games for the Flyers, and last night, he was the OT hero in their victory over the Islanders last night.

The team shared this pre-game clip of Hayes following the victory, and "up front, at centre: all-around good guy, me " is one of our new favourite hockey soundbites.

How could you not love Kevin Hayes? He's just a great dude.