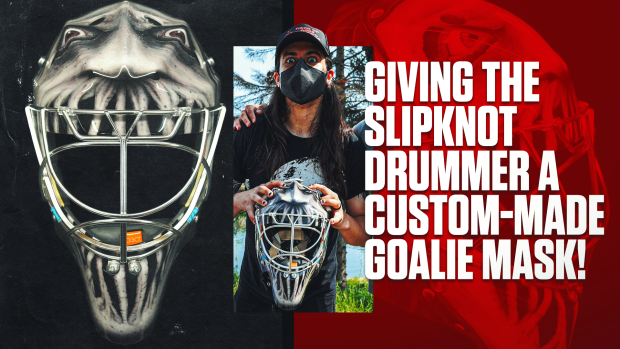 If you know anything about heavy metal band Slipknot, you know that masks are an important part of their identity.

The 9-member band is known for taking the stage in terrifying attire, most notably being the masks they wear. Members become recognized based on their mask, but they also switch to new masks from time to time.

When drummer Jay Weinberg joined the band back in 2014, his identity was not immediately revealed. The band preferred to be known by their stage persona than their “real life” persona.

Saying that, the members do have real-life personas, interests, and hobbies. For Weinberg, a big focus is squarely on ice hockey.

Weinberg grew up playing as a goalie for a travelling hockey team, an activity that he only abandoned when he decided to focus on drumming. He’s remained a fan of the game, formerly cheering for the New Jersey Devils (along with getting swept up as a Nashville Predators fan during the “Smashville” christening), but now maintains that he’s more just a fan of the game than of any particular team.

When Weinberg reached out to Jesse Pollock to offer him tickets to their late-May concert in Toronto, we decided to give him a little gift in return – a customized goalie mask featuring artwork depicting his Slipknot mask!

Jordon Bourgeault – an artist that goes by JBoAirbrush and is responsible for designing Carey Price’s mask, among others – delivered an epic piece of art.

That night, Jay went out and kicked ass on stage along with the rest of slipknot. At the end of the show, he played it up for the crowd by reappearing on stage with a Jack Campbell Toronto Maple Leafs jersey on.

Next time Slipknot comes to Canada, you can bet we’ll be on the prowl for more hockey content from Jay and the band!